by Devorah for a birthday meme. Nope it's not my birthday *G*.
What you do is go to Wikipedia and type your birthdate..month and day only into the search box. And then you list 3 events, 2 births and one holiday.

1903 - The Wright Brothers make their first attempt to fly with the Wright Flyer at Kitty Hawk, North Carolina. It crashes, and 3 days later, after repairs, they get it to fly.

1972 - Apollo program: Eugene Cernan is the last person to walk on the moon, after he and Harrison Schmitt complete the third and final Extra-vehicular activity (EVA) of Apollo 17. This was the last manned mission to the moon of the 20th century.

1 holiday:
There was only one holiday listed. I'm not sure how they missed MY birthday. I guess that proves that nothing is infallible. *G*
Posted by Susan at 4:39 AM 1 comment: 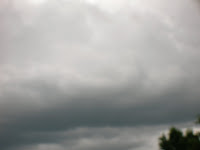 Old things. Afternoon/early evening thunderstorms. I can't remember the last day without at least a bit of rain. Yesterday it held off until just after a make-up softball game. Which we won. Which was soooo hot. This weather is very weird. I sometimes think perhaps I have been transported to Seattle. But then I realize it would be much cooler there. Not only in temps..

But most mornings are sunny, and Hershey makes the best use of it. He works quite diligently 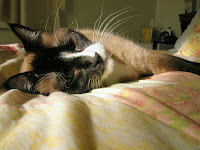 arranging his body and legs to absorb the rays most efficiently. I was supposed to be folding clothes but had quite a nice time watching as he'd look over his shoulder at the east window and then move one foot just a centimeter.


New old things...I got this runner along with a dresser scarf 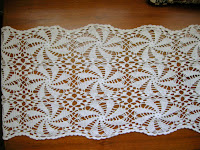 and a tatted doily at a garage sale. I washed and blocked it which was a real trip since it is longer than my bed! There were lots of things I would have like to have purchased but many were out of my price range. I got a real good deal on my little purchases since a friend was the one having it but I didn't want to take advantage. Her inlaws had a big house which they turned into a bed and breakfast. It was just wonderful...not that I ever stayed there, but I attended a party there once. Finally they retired and GAVE the house to their son and his wife..who is my friend. And their moving theory was grand. They took all the things they wanted, and left. Most all of the furniture is still there etc. But one can only use so many sets of china, etc so I'm thinking there might be more sales in the future. I was hoping to purchase a teapot and she had some lovely ones. But I want a plain colored round squatty sort of pot that doesn't hold enough to serve a party. 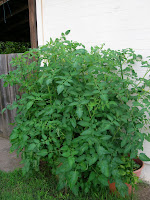 And new new things. The rain is truly making my tom 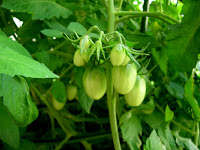 ato plants happy. They are covered with little grape tomatoes. Now if the sun would stay out and let them ripen. I love fried green tomatoes but I think I'd get really tired of slicing these babies up. They're just right for a bite..as soon as they get red.

And new socks too. These socks seemed to go really fast considering it didn't seem like I worked on them that often. Do you suppose I'm speeding up a bit? Now I am ready for fall. I'm looking forward to wearing these then. They are very soft. I've had really good luck with the Knitpicks yarn. 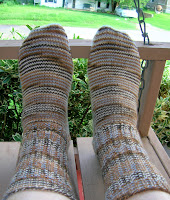 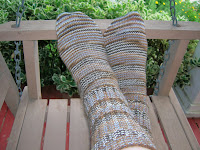 I don't know what to do next. I'm really wanting to crochet a baby blanket. I have the pattern. I know how to crochet. I understand the instructions. But I cannot for the life of me get it to work. I know it must have to do with counting. I even swatched a smaller amount thinking that if I could do it over 10 stitches, I could continue on. It still isn't working for me. Maybe I'll wake up in the morning knowing exactly what to do.

In the meantime, I think I'll go see what y'all have been doing. Laters
Posted by Susan at 5:34 PM 9 comments:

listen to me chatter! OMG I have pre-teen softball chants rolling around in my head this morning! Last night was softball, knitting and the last regular season Deadliest Catch. We won by 2, and The Girl pitched and played a beautiful last inning. And the timing was even right. Game ended; I got home and washed off part of the DEET and settled down in front of the tv. I'm going to miss those guys! One sock is down to the toes now and the yarn is probably infused with bug repellent. Hey a new catch? Tofu, chitlin, and DEET. Why not???

Ohhhhh and some big news while I was offline. The Girl's dad came home from Afghanistan!!!! Woohooooo! She knew he was on his way back but they didn't tell her the actual day until 2 days before he arrived. Not to be mean...just to save her a bit of anxiety, I think. She scared me half to death. I'd talked to her just a few minutes earlier and she was rather cranky as she'd planned on babysitting and it had been nixed. She thought they were saying they didn't trust her, so they finally told her it was because her daddy would be getting home. So I'm sitting here knitting and I hear her flipflops pounding up my steps; she runs in the door just screaming Susu, Susu! and crying. It took a few moments to figure out that they were happy tears.

So, he got home and all is well. They get along great. TG, Dad, stepmom and stepsibs are definitely a family too. She went home with them but they were all back the next day as she had a game so everyone came to watch and we all went out for pizza afterwards. It was so amazing to watch all the girls interacting with him. I liked him a lot from what little time we got to visit. And somehow so far he's managed to be Dad but not overpowering or spoiling. Hard to do, I would think. And definitely kudos to the stepmom who seems to be the axle that keeps everything spinning in the right direction.

During the game last night, I heard some mom telling another person this story. Needless to say, TG had introduced him to all her teammates and anyone else she could find. The other person says "Wow it's like a tv movie...except he isn't a secret criminal". Too funny!
Posted by Susan at 4:08 AM 5 comments:

I saw this quiz over at Sara's and it seemed like the perfect thing to do while the oatmeal cooked. Now I'm laughing too hard to eat!

and feeling rather like a turtle. I swear, everytime this thing come home it works slower. I know, I know, I have dialup. But trust me, it never took 3 minutes to load a blank blogger page before. /sigh. And last week was a real bitch at work so the last thing I wanted to face was a barely moving computer. However...I'm all rested now, so here ya go.

I've tried to visit all your blogs but due to the slow speed I'm not there yet. Sorry, I will make the rounds. It's just that loading all the pics I've missed takes forever. Plus, and this is weird. Since it's slow I get tired of waiting; go off to do something and totally forget to come back. I guess I really and truly got out of the internet habit *G*.

What have I been doing? Well, I've made 4 skirts for summer; sorted a lot of cabinets; read books; watched Deadliest Catch; went to softball games; went out to look at wheat; tried to keep from being eaten alive by mosquitos; started and frogged a sweater 3 times at least and knitted some socks. 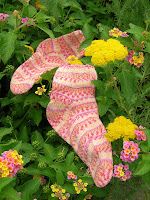 First of all the Cookie socks. Cookie sent me the yarn since I couldn't find any here...and I think that whoever thought up the color scheme must have been growing lantana and yarrow in their flower garden.
Specs: Sockotta
Standard sock pattern made short for summer on Crystal Palace #2 bamboo dpns.
Time spent: I have no idea.
And then these are in progress 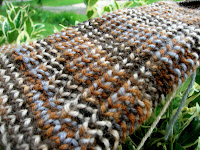 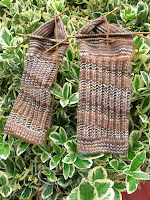 The ribbing is so fun to do, and went really fast. I thought about carrying it down on the foot like I was supposed to but it's pretty thick and sproingy and I wasn't sure how it would feel in my shoes so I chickened out.

And that's that. I'll try to be around more often! Oh...and Laura didn't come to my house. Tricker!
Posted by Susan at 5:23 PM 9 comments: