The New Path is Snowy and Icy

Hello...did you thik I'd wandered off never to reappear? Nope. Did you wonder if I had gotten bored with retirement? Nope.

I've survived the Christmas Blizzard of 2009..truly it was one. And I'm sure there are photos of it somewhere on this computer but I don't think any were spectacular.

Another storm arrived on Thursday. Freezing rain and sleet for much of that day and evening with snow following on Friday. I am grateful beyond belief that we didn't lose power but it's gonna be a long time before I'm able to move my car. I cleared the steps yesterday and it took most of the afternoon. An inch of ice on the top of the vehicle and then that was topped with 6 inches of snow! Although it was cold yesterday, there was sun and 'they' said it would be sunny today in the 40s. Well they forecasted the storm almost perfectly but they missed on this one. It's gray and cold. And last night we had something called 'freezing fog'. Maybe it's still here.

Since I was going to have to put on boots and Yaktrax to go get the paper, I decided to stomp around the neighborhood. It's sooo weird to hear ice cracking somewhere under your feet.

I'm not sure if the following photos are a result of freezing fog, if it's hoarfrost or what. And the icicyles are sooo pretty. But in the cold outside with no people, no vehicles, no sound..it's quite magical. 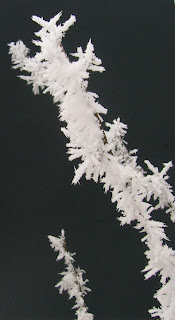 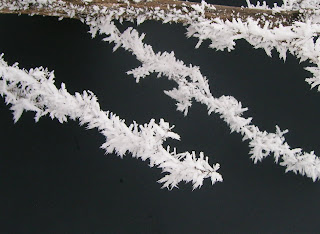 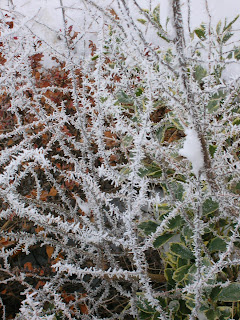 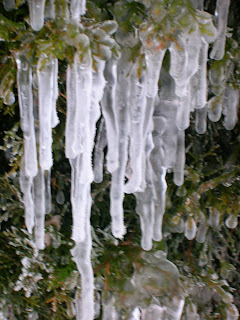 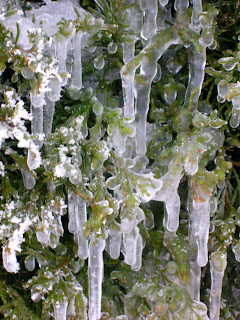 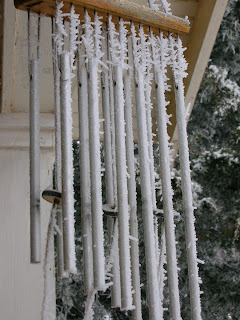