Ummm after much thought, I've decided that this post needs to be saved for a later date..one in which I can have before and after shots. ~~waves to Jackie and Mary-Catherine and Mac and all the others who didn't believe me when I said it was bad.
Posted by Susan at 4:59 AM 2 comments:

So, after a short time here on the prairie, Ramble and I...along with our friends Suzy, Sierra, Mary and Erin headed east. We'd been invited to Juniper Moon Fiber Farm to celebrate the new home of our fav sheep and goats..and to participate in a photo shoot.

It was way early when we set out. Ramble was excited that rather than traveling in a mail bag, he'd actually get to sit in a seat. And very excited to meet his new best friend Sierra. She promised to take good care of him and to make sure he saw all the sights.
He behaved very well on the plane, stayed in his seatbelt, but was really glad to get off in Dallas to meet Mary and Erin. Before long, it was back up in the air on our way to DC.

We had a bit of time to explore DC and Ramble was right there as we gazed at the Washington Monument, the Lincoln Memorial, the Vietnam Wall and the cool neighborhood we got lost in. Then it was off to pick up Lori at the airport (she came from CA)and head out to VA.

Part of that trip was a bit scary but he slept through it..or else he was hiding his eyes. :-) But finally we got to our hotel AND an IHOP...whew were we ever hungry.

The next day found us at the farm where he got to meet Susie and Erin and Paige. We helped around as much as we could, visited with the animals and just generally enjoyed being there. 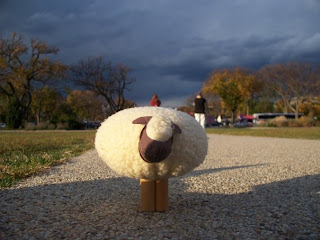 On Saturday, the excitement reached a new high. The shearer was there! The photographer, the stylist and the writer were there. And loads of "aunties". So many people wanted to meet him, he was just all a twitter. He was really rather afraid of the shearer. He actually liked his wooly coat. But after she said he wasn't in the deal he relaxed and even got to sit on her lap. 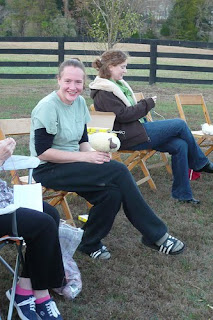 He just had a lovely time but was sooo tired that he slept all the way home. And after an extended rest, he's now on his way once again. Stay tuned.
Posted by Susan at 5:16 PM 1 comment:

A Visitor on the Prairie

Saturday morning I came home from errands to find this on the porch. 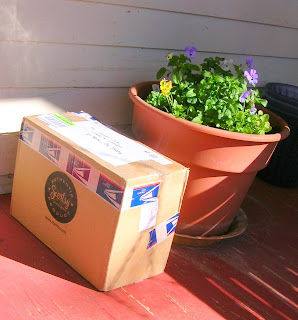 Uh oh, have I ordered something and forgotten about it?? Nope. Inside this box was a slightly travel-weary sheep named Ramble. A friend on Rav is moving to a new place and while packing up stuff this guy was mentioned. It was decided that while she was making way for a new space, he would have his own adventure somewhat like Flat Stanley.

Groceries put away, we headed off to our first adventure. To the LYS of course! I had already planned to run over and get some Cascade 220 for the Red Scarf Project and well...he wanted to go.

He immediately struck up a convo with this guy telling all about his adventures so far. And, I understand that the other sheep regaled him with stories about all the unique personalities he's met at the store. Then it was home and time to watch a bit of football because there would be more adventures tomorrow. 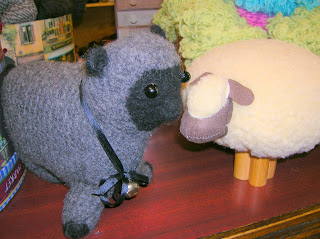 Sunday was a sunny, warm, gorgeous Indian Summer sort of day. And we were off to help my friend Suzy with a bit of sheep deworming. Ramble was a bit hesitant. This was far away from his normal life. But with a quick shake of his fleece he 'sheeped up'. And off we went. Initially he was slightly intimidated by these larger members of his 'family'; but after Tank had a serious moment with him he sat placidly on the crate and watched all the fun. Let's just say that the score was Suzy 1, Sheep 2. He was really happy though to make the acquaintance of Tank, Lucy, Bob and a few roosters. 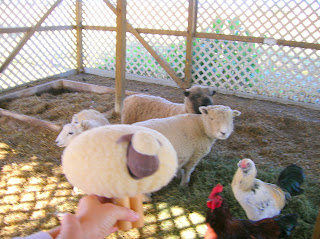 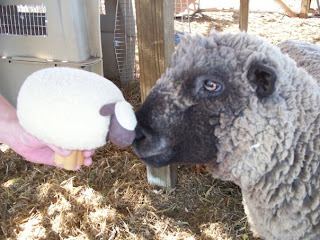 Monday, it's back to work. Amidst the chaos of end-of-month and teaching my replacement about my job (12 more actual work days since tomorrow starts vacation), he managed to have some up close and personal time with my friend Jackie. 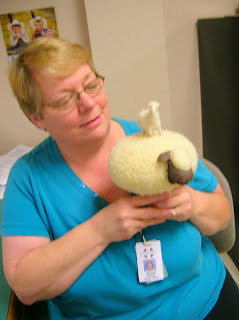 You'll note there is someone standing on his back. She's a tiny little needlefelted goat named Linda. Jackie's a huge LambCam fan and Linda is her favorite so I got her the little goat to tide her over while the LambCam is quiet. And then he waited patiently staring at my desktop while I took care of the end of day business. 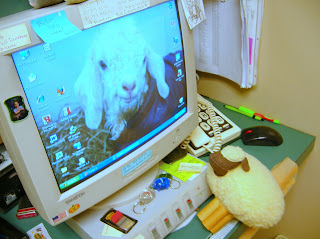 Early tomorrow morning we leave on our adventure to Juniper Moon Farm...airplanes and every thing. So while I run around like a chicken looking for Cheerios, he'll have a beauty sleep. And now back to my never ending lists! 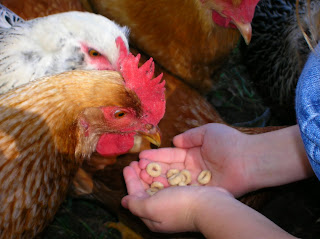