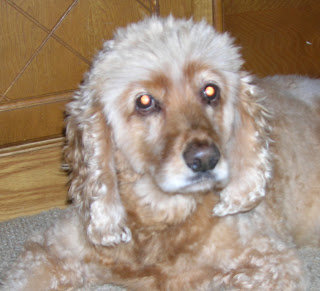 Lest you think all is quiet and boring here at my home on the prairie, I'll tell you about the latest adventure.

Preface by saying that last night my phone rang. My friend down the street asked 'What's going on?' I replied some inane comment about watching football or polishing my toenails. It seems she had noticed a lot of headlights in my block. I'd closed the curtains and had totally missed seeing this. I looked out the window to see two cop cars and two young men, one who was sitting on the front bumper of one of the police cars and the other being interviewed. I sorta hoped I'd hear one of the officers yell "Get Down! Get Down Now!" like on tv but it was way low key. I did get to see the drug dog search the car but apparently it didn't find anything as eventually one young man drove off and I 'think' the other one was taken in for whatever.

Ok, so fast forward to this morning. I woke up a little before 6, let Zoey out and fed the cats. Zo was NOT excited about going out as it was raining lightly and she doesn't like being wet. Coffee ready and me off to read email etc. Cats finished eating and still Zo wasn't barking to get back in. I go out the back door and realize thSat both gates to my back yard are standing wide open! Now yesterday afternoon, I was out there sweeping the patio and taking out the trash and they were both closed with latches in place. Hmmmm...now WHO opened the gates? And WHO didn't close them again? Any connection with the goings on in the street? Dunno.

So, I throw my slicker on over my pjs and wander around a bit but no Zoey.
I drive around in the car. No Zoey. Oh shit! So I eat some cereal, take my bath and get dressed so that at first light I can get back out there. As I put on my shoes and socks I said a little prayer to my previous dog..my soul dog, Cassie who died before Zoey came into my life. I asked that if Zo was dead, would she look after her. And, if she was alive, could she help me find her. I walked out the front door and heard Zoey bark. I looked up and down the street but ...nada. So I started the car and with all the windows down in the rain, I listened carefully.

There it was again! And closer. But no dog to be seen. I parked up the street and started yelling. (Zo doesn't hear all that well or else she is quite selective) Zoey! bark bark. Zoey! bark bark. Closer, but where the hell is she?

She kept sounding closer and then.... I saw an eye... in the weeds and grass of the drainage creek that runs through the neighborhood. Wayyyyy down in the creek. I stepped off the pavement to see if I could coax her out and WHAM...stepped on the very wet weeds and down I went and slid almost into the creek. Stopped just before my feet hit the water. Bark. She looked at me as if to say "Well, don't just lie there..do something!" I pulled off my shoes and socks and stepped into cold, murky water up to my knees.
I'm not sure if she was tangled in the grass or just totally fed up with the morning but she wouldn't/couldn't move. So I grabbed her collar and dragged her over to me.

Then we need to get up the hill and back to the street. It's not all that far, just 10 feet. But it's rather steep, and did I mention, very wet and slick. And Zoey is an old lady with back hips that sometimes aren't too cooperative. And me...well we're a pair, that's for sure. So I got her in front of me, and I'd push her up a few inches from behind and then I'd go a few inches and retrieve my shoes and socks and do it all again. Of course, she was being all goofy and trying to lick my face. Eventually we got back to the vehicle and home. 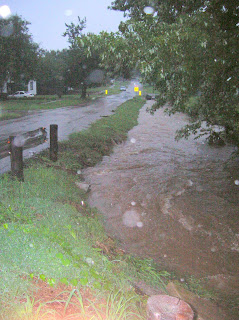 ETA: This is a pic from last spring when the rains were pouring and the creek was rising. Now it's much narrower and thankfully much more shallow.

Muddy? OMG. I think she'd just sat down for awhile cause her butt was just mud. And so was mine but fortunately I had jeans on. Weeds, grass and thankfully I didn't find any ummm water critters.

We've both had warm baths, my second for the day. She's asleep and I think that sounds like a good idea.

I want the rest of the day to be ever so boring!

Hahaha I wrote this much earlier and then wandered off in search of Theragesic and the heating pad. When I came back to it I realized it needed some pics. As I looked through Picasa, I also found some pics of some roving that I apparently bought sometime or other. I have NO idea where this gorgeous stuff is..and once I get a bit more energy, I think a search is in order.
Posted by Susan at 7:16 AM 5 comments: