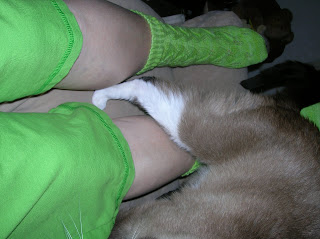 Just getting a picture took awhile since my boy Hershey felt it necessary to rub his face all over them first. I'm not sure if he was staking a claim on my feet or the wool :-) 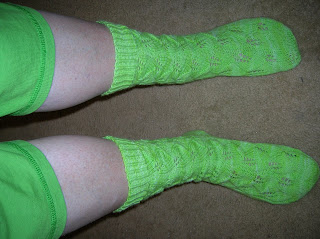 Cheats...Well ok, so I did a regular long tail cast-on. I haven't quite figured out the tubular that Ms.Schmidt uses.

Loads of fun to knit and I love the way they turned out. Thank Ms. Schmidt and Interweave!

Next up? Not sure. I need to make the 2nd Pride Sock mainly so all those balls of yarn can be put up. But I'd kind of like to try my hand at the STR Monkey or perhaps a scarf. Or..maybe all of them at the same time. Nah...that's probably not a great idea.
Posted by Susan at 6:29 PM 4 comments:

And it didn't come in the mail, or for that matter, from a person. I have a crystal hanging in one of the west living room windows. Usually as the sun moves over that way, it makes patterns on the floor or sometimes on living room walls. But yesterday, when I came home from work and walked into the dark dining room, I saw this playing in the corner. 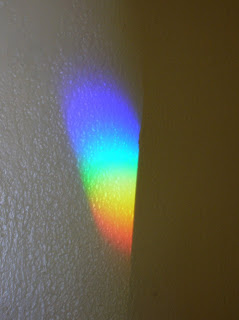 I decided it was there to give me hope for whatever. There are always surprises and sometimes they are very nice. I hope today brings you a nice surprise
Posted by Susan at 5:09 AM 3 comments:

Someone I know and love is moving south and I'm thinking maybe that's what's causing this heat wave! I don't like summer and this just adds insult to injury. The weather man said it was 104 here (in the shade). But in my shade it looks like this.

Blogger won't let me upload pictures. So imagine a thermometer that says 110
And, in spite of watering every day, my tomatoes and zinnias look like this.

There are advantages though. Yesterday I had almost convinced myself that I 'needed' to drive over to the City to check out the 2 LYS and see if I could find something I could afford to make the February Lady Sweater. I have no idea if I could even do it having never knitted a sweater before, but I've read through the instructions a number to times and at the moment, I even think I understand them. So I got all excited and then I opened the door. It was like walking up to a blast furnace. I turned around and came back inside and decided that I'd rather get back in my jammies and knit on my sock. Oh look, there's almost a pair!

I thought I would have them both done by now but got derailed last week with another corneal erosion. This one was different. Usually it hurts like hell (kinda like if you're in shorts and sitting on leather car seat on a hot day..when you get up it feels like all the skin on your thighs just left only this is in your eye); I go to the eye doc, she puts in a bandage contact and pain drops and shazamm it feels all better. Still have to deal with all the drops and stuff but usually in a day or so it's much better and I can get back to fun stuff. This time it wasn't as serious. No cells were lost just kinda banged up and the discomfort wasn't so bad. But the next day something was terribly wrong. I couldn't see worth a darn. If I closed that eye I could see kinda ok, but that eye's vision was like looking at something through moving water. There was no way I could focus. Apparently there was some swelling and since it was over my cornea it was kinda like a faceted something. I dunno. I just know it sucked. I discovered that if I patched it, at least I got rid of all the discordant visions, but my other eye surely got tired of doing all the work. If it hadn't been end-of-month I would have stayed home from work. All's well that ends well and now it's all fine and I just have to get caught up on missed blogs and emails and my 2nd sock.

It's 8:45 PM and I just let the dog out. It's basically dark out, and I checked the thermometer. Oh wow, it's cooling down. Now it's 107! But there is hope. There was a football game on tv last night!!! Woohoo, football once again approaches! There will be an autumn!
Posted by Susan at 6:33 PM 5 comments: