as the world turns..

it must be a bit off-kilter. Work was chaotic, phones ringing like crazy. lots of unexpected "challenges" So it was a relief to get back to my quiet home. I was amazed to find a bazillion emails in my mail box. It seems that two lists that I belong to are quite dramatic right now. I just love it when someone types "please don't take this as a personal attack but.." So I spent some cathartic deleting time. There were still a few minutes before Will and Grace came on so I thought I would check and make sure that the spam filter hadn't put something important in bulk mail. (Knitpicks is NOT spam) There was only one letter from someone/something called Poet's Passion. But um the subject was "Take Control of your Hair Loss" What the??? Do you do it by rhyming? free verse? haiku? 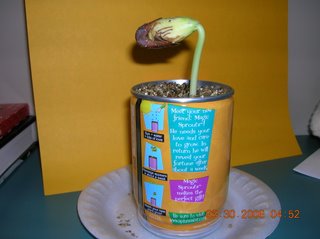 things are going better in the plant world. Arrived at work this morning to discover a little tattoo sort of thing on my secret message plant...well at least part of one. It's kind of hard to see, but that's a shooting star. The little husk is still firmly attached. It's standing up tall and proud instead of being the little hunched stem from yesterday. By afternoon the husk on the other side was coming off. I thought the star was my message but now I'm thinking I get the star and a wish for Sweet Dreams. Now...how the heck do they do this??????? 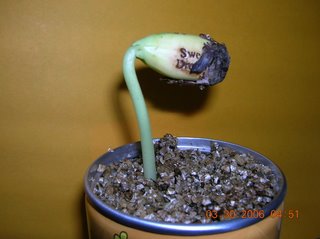 Last night's knitting was not a fulfilling exercise...maybe an exercise in futility and a reminder to maybe pay attention. I had knitted the cuff and heel flap of the second flap the night before. And so...off I go to move farther along. First a bit of cat background...one of my cats, Mercy, is a long-haired calico and I call her my "helper cat". The other two are mostly interested in cuddling but Mercy isn't interested in that very often. She does, however, think that her role in my life is to be right in the middle of what I am doing. I am used to this, and allow for it. Well, ok I should allow for it, I guess. So, last night I get almost all settled in and decide that what I need to complete my nest is a nice cup of chai. I put the sock on the arm of the loveseat and went to the kitchen to heat up the water. I hear Mercy "talking" I talk back but I didn't go see what she was talking about. Then I hear her again. And then I see her. Her nice fluffy tail is wrapped in yarn, it's all around her and dangling at the back is one dpn...with only a bit of sock left on it. Good job at tinking, Mercy! By the time I got her untangled I was totally out of the mood to knit, but had a good laugh. Maybe she's becoming obsessed with all this fiber stuff too!

Here's a picture of sock number one on foot number one. And hopefully someday it will be a pair. It's VERY warm..and since it's warm here, I'll have these to look forward too next winter. 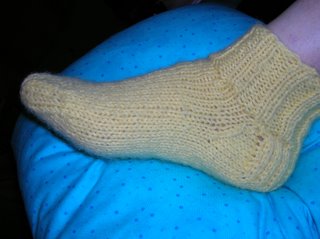 Tonight's been about a bit of dusting, and laundry and plant watering. Oh...speaking of plants, we have some real excitement at work. One of my co-workers gifted me with a new treasure. Purchased at the Dollar Store, it's called a Secret Fortune plant. Comes in a little can with some growing medium...you water it and it allegedly grows and has a message on it. So last Friday we opened it up, and gave it some water. Yesterday the growing medium had sprouted a hill sticking out the top of it, and if you looked straight down you could see a bit of a sprout. This morning it had sprouted but what was amazing 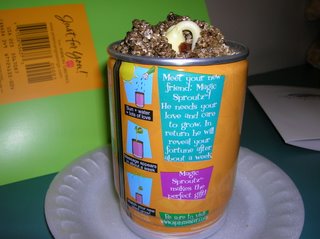 was that about an hour after work started it really sprouted up. I guess it was waiting for the lights. Here are a couple of pictures taken today.

This was about 9:30 this morning. You would have thought someone had just had a baby. Everyone came flocking in to see, and throughout the day they'd come back to see if the message was visible yet. 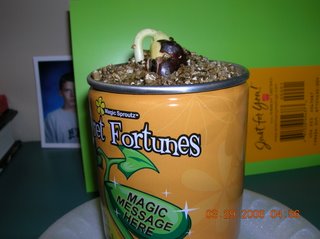 LOL it doesn't take much to amuse us I guess.
I am somewhat noted for my ability to get excited about a new shiny pencil! I think it's a good way to live. Anyway by afternoon it had grown some more.. That dark brown matter is like the outside seed case. Looks sort of like a bean. I surely wish I knew what it was. But, if you have a $ store near you, you can have one too. Will only cost you a buck fifty and you can have a life as exciting as mine! Now off to watch the rest of CSI NY.
Posted by Susan at 6:39 PM 7 comments:

No SSS for me!

I really sorta wanted to work on the someday-to-be-felted bag that's been abandoned during the sock expo...but I've heard so much about second sock syndrome that I figured with my gnat sized attention span I'd never get back to the socks. So, last night I thought I would at least start the ribbing. Well, this one is going so much faster (and looks a bazillion percent better). Just seemed like I had started when I realized I was ready for the heel flap so I finished that before bed. Probably helped that CSI was a repeat so I didn't have my eyes constantly watching for a graphic portrayal of a bullet penetrating flesh
Posted by Susan at 4:55 AM No comments:

Kitchener stitch is a

bitch! I think I could have knit a good portion of a sock in the time I spent on that and it still isn't right...but I shall learn. My "nest" looked like a ransacked library as I had spread out every bit of downloads and book instructions I could find. Not that any of them said anything differently; I guess I was hoping for a very easy answer. But I am still just pleased as punch that first sockie is a done deal! Now to get the second one started. I think tho that the rest of this evening is going to be spent doing nothing! Later...
Posted by Susan at 6:07 PM 1 comment:

Well this wasn't supposed to be another post but Blogger quit on me. Perhaps it decided that this was of such importance to require it's own post.

I have just almost finished my first sock! I still lack the Kitchener part...but hopefully later in the day I can post a picture of it on my foot. Here's what it looks like now.. 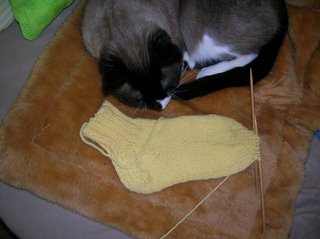 I think I interrupted Hershey's nap with my picture taking but at least he didn't bite my yarn. There are glips and oppsies in this sock and it's a credit to the yarn that a bazzillion frogging trips hasn't worn it out completely but I am soooooo proud of it!

Now as soon as I get this finished, I'll cast on for it's mate. I wish I could order some really cool sock yarn but tomorrow I pick up new glasses and that will eat up any extra cash I might have squeezed out. But I can look, eh?
Posted by Susan at 11:03 AM 1 comment:

Whew, I didn't realize it had been so long since I've blogged. I "think" posts but somehow they never actually get written. :-(

Weather wise, we've actually had some. Last weekend...get ready for this...it RAINED!! Absolutely amazing! I really tried hard to take pictures but I guess I don't quite know how to capture rain. But we got over 2 inches...and that's the first real moisture we've had since October. Then, on Wednesday, it SNOWED...3 inches even. Hmmm...I am not quite sure how to get a picture from Picasa to here. 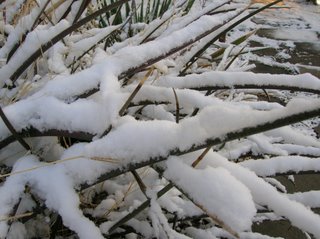 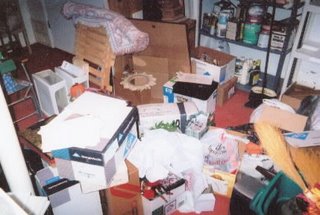 lots of stuff going on here on the prairie. Yesterday was basement cleaning day. OMG did it ever need it. I don't know what happened. I'm one of those people who alphabetize spices and have my socks sorted by color. Somehow though, that organization disappeared when it came to the basement. It's just too easy to drag something down there that I don't want to deal with so...it looked like this.. The thoughts of going down there almost made me sick, but the knowledge that it wasn't going to go away made me sicker! So, after a very long morning listening to NPR and sorting and tossing and dragging boxes and bags upstairs to save in the garage for bulky trash day, it now looks like this... 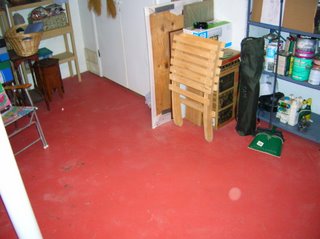 Much, much better! I would really like to get rid
of the paint, but it has to be dry and then you have to find a place to get rid of it. Sometimes they have toxic waste day in the City. I guess I'll take it up a bit at a time and let it dry on the patio.

But I am really really pleased to have this much
accomplished.

Today was a bit more creative. To reward myself (yes, I bribe myself 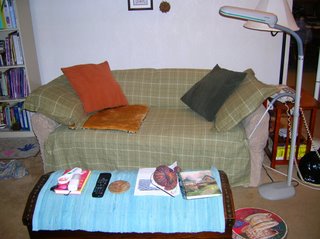 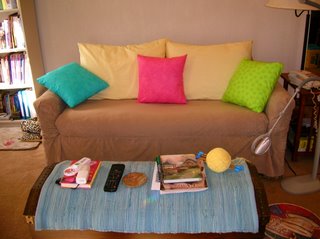 Hey...I'm the proud owner (finally!) of a digital camera! Got it on sale at Staples last Sunday and have been having great fun taking and deleting pics.

Haven't quite got up the courage to try and download to the computer but hopefully this weekend.

I've been experimenting with a scarf. Quite simple pattern. Row 1 knit. Row 2 k1,p1 all the way across on an uneven number of stitches. It sort of looks like a thermal underwear pattern. I'm using Plymouth Encore Colorspun (75% acrylic, 25% wool) which I am told is what makes superwash wool. It's an autumn-y varigated and I really like it. However, it's curling BAD. 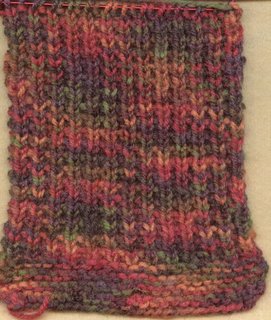 See....actually here, I had squashed the scanner cover down so it doesn't look toooo bad...but just wait. Those little rows of v's are actually ridge 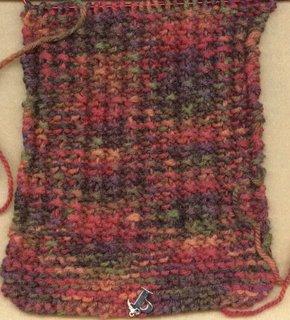 Here's the other side without the scanner squash..

Obviously I haven't quite figured out how to move stuff around in here but this will have to do for tonight. My back's quite cranky and I have a date with the heating pad and some CSI. Ahhh such an exciting life I live
Posted by Susan at 5:00 PM No comments:

You appear to be a Knitting Adventurer.
You are through those knitting growing pains and

standard pattern if it's not too complicated

and know where to go to get help. Maybe

you've started to experiment with different

fibers and you might be eyeing a book with a

you prefer to stick to other people's

patterns but you are trying to challenge

yourself more. Regardless of your preference,

you are continually trying to grow as a

knitter, and as well you should since your

some serious hints, these days.
http://marniemaclean.com


What Kind of Knitter Are You?
brought to you by Quizilla
Posted by Susan at 5:19 PM No comments: