A bright, breezy day for going to visit some alpacas. I've forgotten the exact title but it was something like Alpaca Farm Day and surprisingly there is one not too far from me!
Chisholm Trail Alpacas is a family owned enterprise and they were all very friendly and knowledgeable. But the stars of course were the alpacas. There were pregnant mommas separated from the youngsters we got to know. No upsetting them in their "delicate condition". So they looked on and probably gossiped about all these goofy folks that had descended on their home.

There was also a guard llama (who happily didn't spit on any of us) and guard dogs who were extremely happy. I'm glad they didn't see me as a predator. You all probably know a lot more about alpacas than I do. I didn't realize there were two distinct types. I got to meet a suri whose fiber, when ready to be sheared will resemble dreads I'm told, and huacayas whose fiber is shorter, sooooo thick, sooo OMG it is wonderful. These little guys have really nice fiber and in fact, some was carded and entered in a contest and won a blue ribbon. 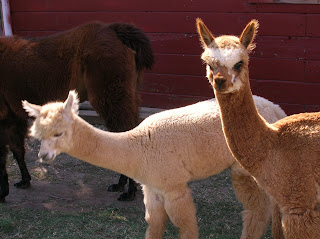 They were a bit skittish but, at the same time, quite curious. Here they are looking to see whose walking through their backyard. 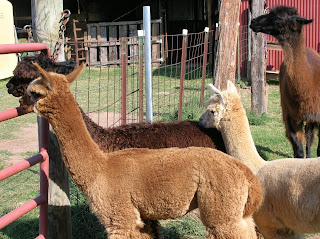 A woman and her little girls, one still in arms and an older one arrived and it was so cute watching the older one interact. She was very good at being calm and patient and the alpacas were entranced by her. I sat down on the ground in hopes of getting some good shots of them and suddenly there was an alpaca bumping the back of my head with his nose. At that point, I forgot about taking pictures and was all about sitting still so we could get better acquainted.

I loved this little one. Named "Oklahoma Rising" after a song written for the Centennial and called Okie. I love the color of the fiber and the sweet expression. 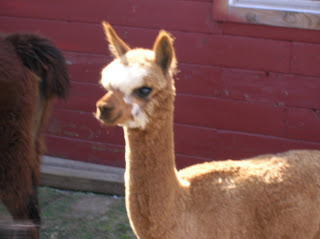 Indeed, I fell in love with them. I don't have quite enough land here but that didn't stop me from buying my very own Okie! 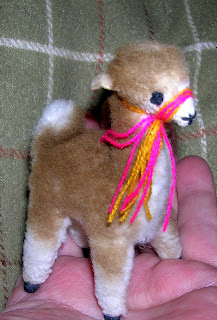 Then after a quick stop at Hastings where I found one copy of Simply Knitting; it was time for a lunch stop at Long John Silver's where I got a 10 % discount AND a free ice cream cone! Ahhhhh life is good! And there were more adventures to come.

Which you will hear about after I get this house cleaned up a bit; groceries purchased and the laundry finished.
Posted by Susan at 8:07 AM 6 comments:

Just a Kid at Heart

How Is Your Inner Child?

Almost true. I can be quite cynical at times but I'm working on that.
Posted by Susan at 4:12 AM 1 comment:

Ridin' Down the Trail

Since it's our Centennial year interesting things have been going on and this week we get to share in one of them.

Cattle Drive 2007...minus the cattle. It was hot and they'd all taken to the trees and I couldn't get there from here. But do go look at the link. And if you like cowboys and cowgirls...real ones...there were a lot there. Part of our Centennial Celebration the drive will end up in Caldwell, Kansas and has roughly followed the Chisholm Trail.

You could drive in from a gate on Route 66, but I chose to go from Fort Reno. It's a real fort..or it was. Still in use as an agricultural experimental station, and in the process of having the buildings restored. People still get married in the chapel but I don't think anyone is allowed to be buried in the cemetary. I don't know if it's on their site, but Black Jack, the riderless horse in President Kennedy's funeral was raised and trained here.

OK, so the lady at the visitor center said, "Go down the road that says you can't go down it. For awhile it will be paved, then it won't. You'll see a sign that says "wagon rides". Stop this side of the sign and wait." Simple enough. I got a bit distracted on the way. No, not distracted; attracted. So stops were made and pics taken. Like this somewhat secluded site 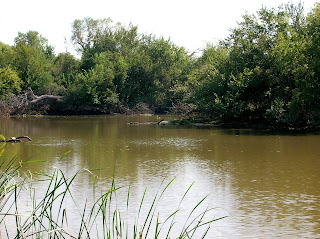 But at last I got to the sign and the wagon was returning with it's load of folks.
I clambered up in the bed of what, during the drive, is a chuckwagon. And it's a really authentic wagon but there's been some restoration done. 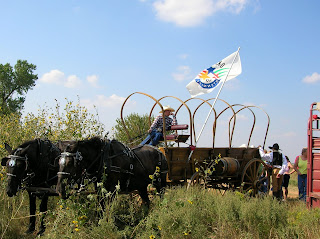 As we bounced and jiggled and shuddered on what appeared to be barely a worn path, I looked out across the horizon. And imagined how it must have been to come here when it all looked like that (without water storage thing LOL). 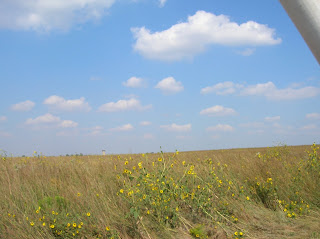 When sunflowers slapped you as you rode by them and the sound of locusts and horses snorting and snuffling as they ambled along were the soundtrack. Until you heard someone calling to their child. Or someone laughing. Or someone crying.

The horses, Dan and Pat, were getting rather tired of ferrying us city slickers but they gamely did as they were supposed to when our driver said quietly "Get up now boys" And perhaps they knew they were going to have a nice break with a bath before some evening festivities for bigwigs. 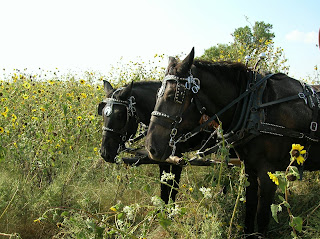 We arrived at the camp. It was getting on towards supper time and there were scents of meat being cooked over a fire. There were guys standing under the shade from a wagon cover, laughing and doing that punch-in-the-shoulder dance. And nary any cattle to be seen. Well not exactly true. You could see vague shapes and colors that didn't belong in the trees. The Oklahoma sun wasn't going to be beating down on them. 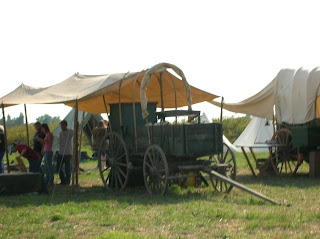 Today they'll be moving on north. And I wonder, if in this rather secret space, there just might be prairie spirits laughing because they were there when the fort was alive. 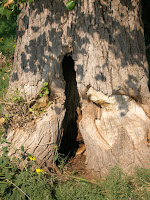 Did you see that flash of light? That was me flying in here on my new cable modem!!
However, it involved me it got really complicated.

The installer was scheduled to be here between 1-4 yesterday afternoon. We are incredibly busy at work so I worked until the very last moment and zoomed home. The guy was here just shortly after that and told me that it would probably take maybe 30 minutes. He left at 5 pm. And I had no internet. TV was iffy but it got better once he drove away (??). Prior to that, every so often it would just lose signal for 10=15 seconds.

He had used 3 different modems; replaced all the cable in my house; replaced all the splitters and finally replaced the line from the pole to the house! And talked to various and sundry supervisor type people on his Bluetooth. Finally he said that his supervisor was going to come. Someone named Dan.

No internet but the tv was working which was a very good thing since OU was playing football and it was televised and I would have been seriously unhappy if I'd been unable to watch. So I made a quick sandwich so that supper would be over before 'Dan' arrived.

So it was decided that someone would come today between 10:00 and noon. And while the clock was chiming a new guy arrived. He just left. It seems he had to re-do everything the first guy did. But it's all functional and I am a zoomy girl.

All's well that ends well. And there were benefits. I got all the laundry done yesterday including the ironing. I was at the grocery at 8AM and everything is put away and the rest of the day may just be play. Now I am going to go take a picture so I can see how fast it uploads.

And slowly but surely I'll replace all the bookmarks. And get used to using IE at home. I kinda miss my Firefox.
Posted by Susan at 9:44 AM 11 comments:

after tomorrow. I'm scheduled to step nervously into the 21st century. After a bazillion hours, I will finally get cable internet. And I won't have to schedule blog posts (well the photo part) for large blocks of time. Either that, or I will have a lot of extra time because it doesn't work at all *G*

In the meantime, while I scoop litter, make my bed and have a bath I will upload pictures that hopefully will result in new knowledge. Last winter, I bought an orchid at W*Mart. I asked questions at a real nursery, repotted it with the stuff they recommended and once the blooms fell off, just watered it and dusted the leaves. They told me that the woody stem would dry out and just break off. That didn't happen. They also didn't tell me about these shiny, gray things that are growing out from the base. Are these roots? I have a little bird that clips on the pot and one of them was getting a bit personal with that yellow thing...wrapping right around it.

The long stem turned really vibrant red/orange and now it's drying up. 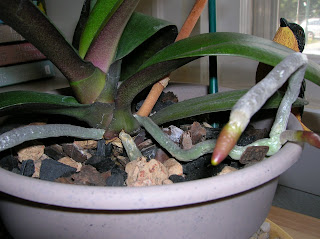 But what to do? Does it need a bigger pot?? Is it planning a takeover?

The 'preview' of this pic that Blogger shows me is a bit weird. Actually it shows 2 of the same pic. But since after I click on the 'add' or 'post' all I get are lines of code, I have no idea what it will actually look like on the blog. If it's goofy, sorry.
Posted by Susan at 4:31 AM 10 comments: 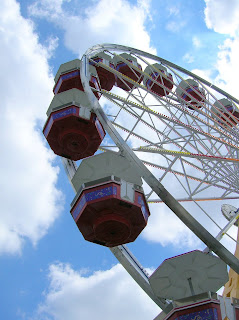 For the Great State Fair of Oklahoma! It's the Centennial celebration and I went on opening day. I usually go on the Sr. Day (which is next Wednesday) so I can get in free, but my boss will be off this coming week. However, for opening day they had a special admission price of "100 pennies for 100 years" Hey, I can afford a dollar!

I just had the best time. Ate lots and lots of fair food. Saw cows and goats and chickens and people. Heard squealing pigs and squealing children...and squealing young at heart on the rides. It was just warm enough, and just cool enough and just breezy enough. As the baby bear said, "It was just right"

Every year I hear folks say "It wasn't as good this year" "Or it's getting smaller". Perhaps I am not perceptive enough, but to me it's always big and bright and huge and colorful and ever so much fun. Or perhaps as they get older their fascination fades. Thankfully mine is just as much there as it was when I attended for the first time in 1957. That year for the sesquicentennial, the theme was Arrows To Atoms. And I remember wondering if I would be around for this year. But probably if I was I would be too old to go. LOL. My thinking has changed. 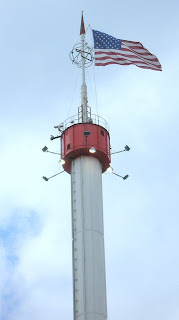 It was wonderful discovering that my friend Susan's Centennial Quilt had been awarded a blue ribbon. She designed it and even included a picture of the "home place" I was absolutely smitten with the fabric used in the letter K. It was wheat! I didn't stay as long this year as I was to get together with a group of fiber friends in the evening and I thought it would be good to get home in time to clean up a bit. And to be able to enjoy a bit of my souvenir. ohhhhhh the sugar! 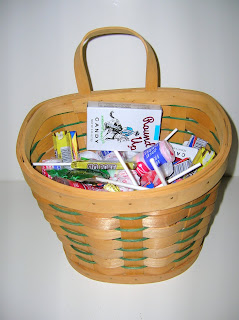