Living Out of a Box

Well, sorta. For the last two weeks, I've been putting all the books in the living room and bedroom in boxes and toting them down to the basement. I didn't realize how many there were or how heavy they were. I finally wore completely out so some of the knitting books and notebooks are in their boxes in the play room. All furniture was dragged out into other spaces and a deep cleaning began. Walls were washed (if I'd planned better, I would have painted) in anticipation of the great Labor Day/Rug Doctor weekend. Which would have been easier if I hadn't had to drag furniture from one room to another in the midst of it. But it's done. And I can paint later..maybe. 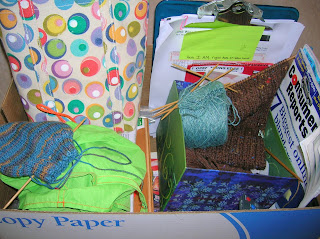 The box? Well here it is. Current knitting. The stripey sock is also known as Softball Sock since the only time I knit on it is at The Girl's games. And school ball just started. The gorgeous seagreen/blue yarn is a new acquisition. You can see it better here. 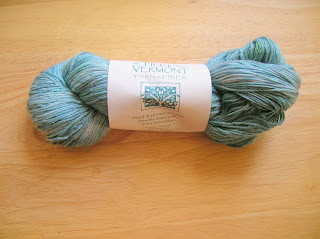 Totally yummy goodness from Jessie at A Piece of Vermont. Its 60%merino 30% Bamboo and 10% Nylon. Undoubtedly the most luxurious sock yarn I've ever had. So far, I have the ribbing done for one sock. After this weekend, my hands hurt too much to use my smaller needles. But just petting it occasionally makes me very happy

And next to it is the project getting the most time lately. A winter scarf that's easy on the hands and brain. Just what I need right now. 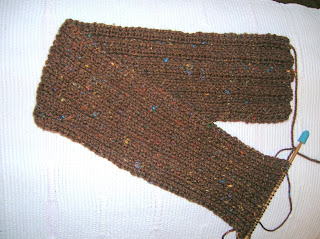 And a new magazine that arrived in the mail...and tucked inside it are bills that came the same day. Note to self: Pay bills before they get lost. And something from Netflix and the remotes.

Late yesterday I brought in a dresser that was in the play room to replace the non-functional cabinet model tv that used to be used as somewhere to put the little tv that works. It's now on the front porch waiting for bulky trash day. How redneck is my life?? Oh yeah, baby! This dresser will give me a lot of storage in there. Now to figure out what to do with the stuff that was in it. And the wall stuff needs to be moved. The clock will stay, but Gold Hill and sheep and Beatrix Potter have to find a new space. 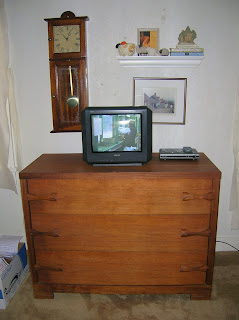 Much to do. But today is Labor Day! It's, for me, ranks right up there with Christmas. The winter holiday will always be beloved if only for all the sparkle and twinkle it adds to life. But Labor Day...it's about ME and YOU and all the others that work for a living.

And it will be celebrated on the loveseat with my feet up. And it will include lots of hopes of good fortune for those affected by Gustav. Hang on Terri! And the scarf will grow a bit. And email will get answered. And maybe...err..probably a nap.
Posted by Susan at 6:28 AM

Fall cleaning is big with you, I take it! I should talk - I just did that here too - moved a bunch of furniture around - etc.

I have some of that Vermont yarn waiting to be knit into socks...looks almost to be the same color.

I'm doing laundry today - only because I stripped the bed and put my quilt into the laundry and it was chilly last night without it.

Ah,signs that fall is in the air!!!

Just reading this wiped me out! Hope you recovered from all of your labors!