Yesterday morning as I arrived at work, a giant fish head and skeleton greeted me on the sidewalk. What the? The lake is rather to far away for a flying fish. Oh..and what's this? A rather battered carcass of another kind.

The answer? The foxes are back! This time Mama had 8 kits! Lots of feeding to do but I would have loved to see her catch that fish, and then carry it back over the golf course to her babes. I can't positively say it's the same mother as last year but it seems right. Odd that another one would come back to the underground pathways made back then. 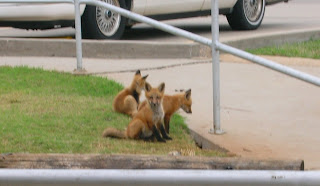 I wasn't able to get all of them at once. They move really fast and while one group was still, the other were zipping off in different directions. Oh what I'd give for a DSLR with a really good telephoto lens! 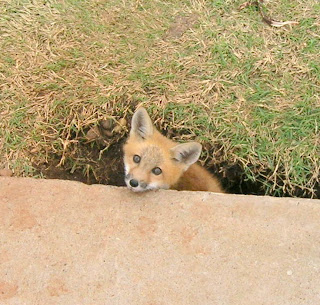 Later in the afternoon, one of the girls I work with announced that she (the fox..not my coworker) was stalking some Canadian geese that were over on the golf course. Now I'm aware of the food chain but I'm not one for watching it so I declined to go watch. Not to worry, those geese made short shrift of her quickly and she beat a path back across the road.

The fish head was unrecognizable by the end of the work day. Hungry babies for sure. We did do a bit of a litter pick up. One of them had been chewing on a plastic thing. Not good, baby!

It's pouring rain today so I doubt that I'll see much of them. But somehow knowing they are out there makes the work day more fun. Mainly because I don't have to worry about protecting any chickens!
Posted by Susan at 5:01 AM

They are so cute! I wouldn't get any work done because I'd want to stare out the window at them all day...

Oh, how wonderful that they are back to brighten your day. They are so adorable...what a little face...

What an awesome picture. The little one in the sidewalk hole just peeking at you is so cute. I don't have a thing to put on my blog so I haven't blogged. I need to go find me some fox.
Sheri in GA

How cute!!! Your last photo is amazing!

awww.... you did get a great shot of the little guy peeking out of the hole! who needs telephoto! looks like you were right up close.

Don't worry about Canadian Geese..hahahha....they have a wing span of 6 feet....they can protect themselves. As a matter of fact...some businesses have them as guard geese...instead of guard dogs. It's hard to get onto some of the tee boxes at my local golfcourse if they stake it out for a sunning spot. Even using my longest club as defense..is chancing it.

Wow, they are awesome!

Are they still there? More pictures, please?!

I think red foxes are so beautiful, but unfortunately, with chickens, I hope I don't see any around my house. :-(

Foxes are so much prettier than coyotes. Bleeecchhh.