And that was just fine with me! Work atmosphere was intense last week and it was so nice to just not have to think very much.

Of course, there was laundry. And ironing. There was also a doggie haircut. She doesn't look great but she is much cooler and it's getting HOT here. No fair. It's supposed to still be spring. Did I ever mention that I really dislike hot weather? Thank goodness for a/c. My bangs are shorter. Some flower seeds were planted in large pots. Hopefully someday there will be pictures of happy blooms.

The pantry is much more open since I pulled all the high sodium stuff off the shelves and it's now in the trunk of my vehicle ready to pass on to coworkers. Good bye chicken noodle soup. And tomato soup. And vegetable beef soup. And green beans and carrots. Actually about all that's left of canned goods is a couple of cans of fruit.

There was a trip to the post office to mail a package. And mail for me too! 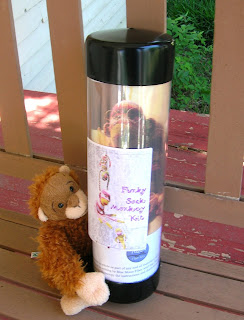 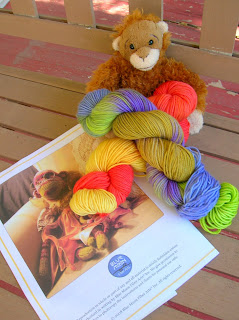 I blame it all on Olivia, my Nature Conservency orangutan. She insisted she needed a friend. And who am I to deny her? Especially since it involved yarn. And here you have my first ever Socks That Rock yarn! I've wanted some forever!

There was a trip to the library where I found 500 Low Sodium Recipes. It may mean that I can actually eat some things I like with adaptations. If I find that I like many of the recipes, I'll buy it. Yesterday I made "roast" from a little steak and some low sodium boullion and vegies and it's GOOD. Surprisingly so, since most of the bright ideas I've had over the last couple of weeks were rather tasteless.

I started on a de-clutter in the dining room which resulted in quite a bit of shredding (it's also where the computer and printer is and my bill paying station). I still have a ways to go but still..it's a start. The warmer it gets, the more I want everything in it's place (preferably where I can't see it)

Knitting nada. Sewing nada. I had great plans but somehow I shuttled them down farther on the list and curled up with a cozy murder mystery and a plate of grapes.
The only 'creative' thing I did was to make a cord with my little cardboard kumihumo thingy that I played with at the Fiber Rendevous. I think it would have worked much better if the braided stuff had been a single cord. But that's what I found to play with. 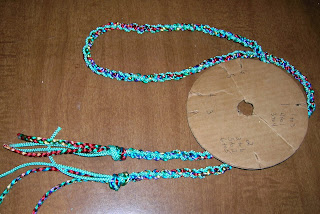 So there you go. A very low-key weekend. And now it's Monday. It's How Many Days to the weekend???
Posted by Susan at 4:35 AM

Oh...take my breath away with that beautful yarn!!! The monkey is cute too...

You sure cleaned up the cabinets, didn't you? It's hard to try and do what the doctor orders! I know!!!

I am so glad that you also caught the organizing "bug." LOL

I know soup and broths are so high in sodium so now I'm saving chicken bits and will make my own broth.

Hi there! I'm still alive too. I've been on a no salt/low salt diet for about 13 years and believe me, I was the salt shaker queen! I don't miss it a bit. If I make something that I think needs that extra kick I use Mrs. Dash. It's in the herb/spice isle and comes in a zillion different flavors. I love the garlic and sun dried tomato and the original. Lots of onions, garlic, you'll soon realize how salty stuff is WITHOUT adding more. I'm amazed! I also use lots of seasonings, herbs and spices.
Now, any tips on how to get rid of this dang 17 pounds? It's making me really mad.
Take care, glad to hear your still cleaning and enjoying life.
Sheri in GA

I want one of those kits--how cute! What color did you get? It seemed kinda confusing to figure out the color combinations (or was that just me?).

If you start from scratch then low-sodium is not that tough. Most things do not contain high salt levels in their natural state. For the most part, Mike tends to cook low salt just because the food doesn't need it.