Friday in the Big Town

Yes there was yarn! And two LYSs. One was really busy and crowded and I must admit to a bit of overload. The other one was quieter and I had fun talking with the other shoppers and staff.

Panera Bread was yummy but crowded! I did secure a seat next to a young man working on his laptop and putting together a contract for mucho dollars according to his phone call. (I'm constantly amazed that folks just assume the people near them aren't listening into their side of the convo. I knew where he'd been, who he'd talked with and how much the contract was for)I was happy for him. What a way to honor Friday the 13th and I'm sure his bosses thought so too. And the broccoli cheese soup was yummy as always. And, I brought home a cinnamon bagel which I just had as a mid-morning snack today on my Mrs. Tiggywinkle plate. Yes, I'm always about maturity! 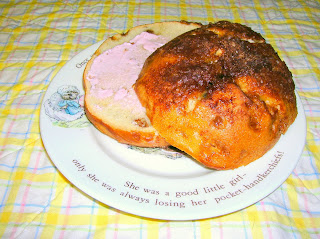 As for the new addition to the yarn stash, I got TyDye sock yarn (it really called to me in the middle of that very gray, damp day) and some Comfort worsted for a baby blanket. For someone who damn well better not be pregnant since she's 14. But I want to make sure that when she does have a baby I'll be represented. 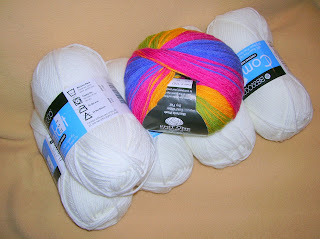 And now for the cardio. He basically poo-pooed the idea of unstable angina. Didn't even discuss the possibility. Apparently my blood pressure was really high when I got to the ER so he thinks it's related to that and prescribed some tabs to dissolve under my tongue if it gets high again. He asked repeatedly if I was stressed at the time. I kept telling him no, that it was actually a very nice work day and I was happy. Finally he looked at me and said something to the effect of if he worked there he'd be stressed! LOL He seemed to think I wanted surgery....NOT! And went to great pains to tell me that he thought his partners often did that too soon. He also gave me an Rx for a new bottle of Nitro which blew the budget even with the $20 off coupon his nurse gave me.

And suggested that I put it in my pocket and walk a lot because he'd be interested in chest pain related to exercise. I guess I should just blow this off as an expensive adventure and go on with my fine self. But Sheri, it's scary! He had no explanation why I was so tired and why I get more short of breath except that that could be related to my smoking history. Funny tho that everything happens at once. Susan shrugs.

And in knitting news, I'm almost to where I cast off the lower part of the neck in front. But I'm confused. It says " With right side facing, work across to the first marker; join a second ball of yarn and bind off center stitches for the front neck; work to the end, 36 stitches remain. OK...got that

Then it says " Working both sides at the same time, work even until the armhold measures the same as the back to the shoulder shaping, ending with a wrong side row.

So, I'm on circs. I knit on one side, then drop that yarn, scoot over and work the other side with the first ball of yarn? Maybe so. Or maybe I'll start the baby blanket. :-)

And, I guess hitting publish post (3 hrs after I wrote it) might be appropriate.
Posted by Susan at 6:32 AM

Sheesh! No answers but at least you got nice yarn.

Yes, you're going to work both at the same time so when the first one is done, you mush over (love that one) and pick up the other ball of yarn and knit the second one. It'll be easy as can be when you're actually doing it.
Sorry it took so long to answer. I have to share the computer with the Baby Girl and by the time she gets off I don't feel like getting on.
Sheri in GA