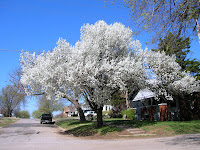 And it's a blooming one! My neighbor's Bradford pear is really showing off this weekend. Too bad that I couldn't get a good shot without a power line running through it. But the blossoms against the bright blue sky are simply spectacular. In the close up one you may notice that it looks as if I have a prison tattoo on my hand. Nope, it was a reminder that I wrote yesterday..unfortunately written with a brand new Sharpie. I'm sure eventually it will all be washed off. :=0 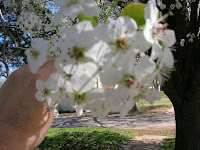 The reminder was so that I wouldn't forget that Zoey the wonder dog had an appointment to see the vet for her yearly checkup. Since it wasn't until 10:30, sometime I decided that that would give me time to run to the west side of the City to Hobby Lobby and Petsmart, which is practically next door. And then, in bed last night I decided that I would just take Zo with me. She loves going on errands and doesn't get to do it often enough. I didn't SAY anything about it to her. I got up as usual, drank coffee, watched the news yadda yadda. But that dog was on my heels all morning. Wagging her tail, running for the leash etc. Too weird!

So, off we went. I was going to make one more try to get metal US1 dpns that were close to the same size as my Crystal Palace ones. Weird that I have 2 other sets and they are both two different sizes and significicantly larger than the CPs. These Susan Bates that I got today at least fit into the needle sizer about the same! I was at Hobby Lobby about a week and a half ago and their knitting stuff and needle felting stuff was 40% off. Imagine my surprise when I discovered today that it still was! So since I'd saved money on the needles I didn't worry about getting another package of nf needles and one of those brush looking things to use instead of the foam rubber that I've used before. Oh and some styrofoam eggs for an experiment.

Then off to Petsmart. Early...hardly any customers which thrilled Zo as that meant she got ALL of the attention as well as extra free cookies. We stocked up on Dentabones and she got a new collar and a lot of petting and then off to the vet.

I've been really good about not giving her any table food; cut down on her dog food; and I just knew that she'd either lost weight or maintained. But nope, she gained 2 lbs! :-( As soon as this bag of food is gone we'll try some more serious weight loss food. Happily though, he said her heart sounded quite a bit better than it did in November. Yay!!! We had to wait awhile as he was busy with this eensy teensy puppy whose mom had abandoned it. It was one of a litter of 5 and the only survivor. A friend of the momma's owner had taken it upon himself to try and save it and so far it seems to be doing rather well. But soooo tiny. It gets 2 cc of formula stuff every 2 hours and he sets the alarm clock so he'll be sure and not sleep through the night feedings. I was impressed. I sure hope it makes it without any problems. It was funny to see this big cowboy sort of guy with this teensy puppy wrapped in about 1/4 of a receiving blanket and tucked inside his shirt!

Now it's time to get some housework done so I can have some good knitting time. Both Monkey socks are ready for their toes!!!!
Posted by Susan at 10:22 AM

I think a little weight gain in the winter is normal... for all of us. ;^) Have you tried the green bean diet?

I have metal US 1s that I'm not using if you want/need.

Sounds like a pleasant day. Give Zoe a hug for me for being such a good girl.

So intuitive, that Zoey! What a doll! Glad you got to take her with ya!