Completed even.
My first wearable other than socks.
Specs: Rowan Cashcotton DK..less than a 50 gm ball left from something.
Needles: CP bamboo #2 and Bates Str Red #5s
Pattern from Knits for Children and Their Teddies by Fiona McTague. One of the books I bought on sale awhile back.
Made for: One of my bears LOL

So here is Barnsie wearing his new vest. The pattern sort of came from this book. Except I got mixed up and ended up making up part of it as I went along. Didn't help that B's tummy is rounder than the pattern called for. I can empathize with that. Happens to me too. The weirdest part was the ribbing that goes up the sides of the front and around the neck. I just thought that I'd be picking up stitches to knit it. But instead, I was to just knit long strips then sew them on. And I totally didn't understand the button holes. I figured out how to make them, but couldn't figure out what I was supposed to do in between. B likes it a lot! 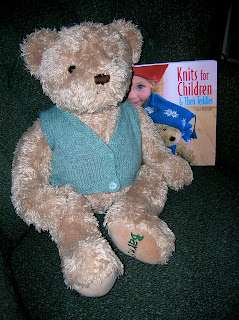 Completed even.
Posted by Susan at 5:33 PM

That little bear vest is so darn cute. I have that same issue around my middle..

Sometimes I think I am very weird. It was supposed to have little patch pockets. But as you can see, B's hands are awfully large also so the pockets would have had to be huge! Last night it dawned on me that they were for looks only cause probably teddy bears weren't going to be trying to put their paws in their pockets. Or...would they, in the dark of night when nobody could realize they could do that? OK..off to eat breakfast! *G*

It's very cute. maybe he needs some matching slippers?

Adorable. No, you are right, the pockets have to be big enough for his hands -- you never know what teddy bears do in the night. *g*

Dave, I was just thinking today that I needed to find a baby bootie pattern and try to fake some slippers. Actually I was browsing through the books on sale at Knitpicks and trying to justify ordering 50 Baby Booties LOL. Fortunately it became time to leave for work and to put on my grownup persona.

Devorah, I'm glad you think so too. And besides, if there were pockets, there would need to be a penny in one of them and how would he ever get it out???