FO's and a Happy Surprise

Yes, finally there is an FO here. Yay! There really is some good that comes from doing nothing but take naps, watch Court TV or A&E and knit. 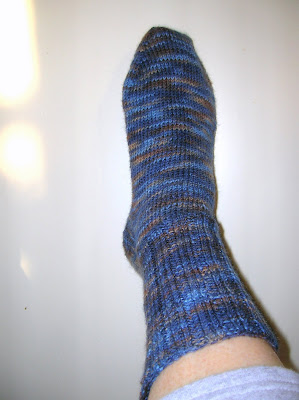 I think I started these in October but they got ignored for awhile. I can't remember why. I made them a bit too long as most of my socks seem to felt a bit or shrink a bit or something. Once I've had them on for awhile they stretch out but I was thinking that they might wear out faster that way. Then today I realized that the only ones that had that problem were my Knitpicks..or maybe the Regias and the Monkeys all just happen to be longer. Oh well...they aren't that too much too big. And yes, there really is a PAIR. I tried taking a picture with both of my feet up on the door and promptly tumped over!

Sometime towards the last of the week I decided I wanted to make a pair of socks out of some Cascade 220 that I had. I found a pattern. So, I got out the bag that has worsted in it and found it. Hooray...except it wasn't enough. I really thought I had purchased two skeins of it...but there was only one there. :-)

Yesterday was hideously cold and the north wind was blowing snow and the roads were slick. I really didn't think I wanted to drive to the City for yarn. Besides that I haven't quite recovered all the energy I wasted last week. Oh well..there are other things to knit.

While blog reading, I read a sad story over at the Farm Witch's. It seems someone she's spoken of before had her whole house burn down. Saved the kid and her purse and a sock on the needles. And, she (FW) asked if anyone had any yarn to spare.

Well sure, I have sock yarn. Not fine handspun but sock yarn all the same and I think it breeds because some of it I don't remember buying. So this afternoon I was gathering up some needles and stuff for a kit..you know, scissors and tape measure etc. And then opened up the cedar chest to get out some yarn. And there...right in the middle of the sock yarn was the other skein of the Cascade.

So, I think I'll eat supper and start a sock! If I don't see you again, enjoy the week! Do something that makes you feel good whether that be a bath or starting a new project of sleeping through the 25th. And be glad you have a home! xo
Posted by Susan at 3:17 PM

Are you feeling any better?