...and dinner but I'll spare you that. 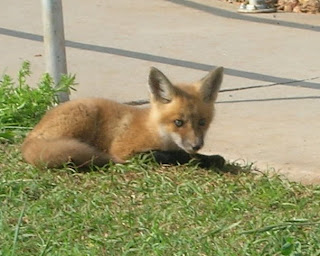 Friday at 5 PM found our place of business empty except for me and the clinical coordinator. Everyone had been gone for at least 30 minutes and the parking lots had been quiet. So after punching out, I headed out for the weekend. My brain was already fixated on two days for me and as I rounded the corner I almost tripped over one of the kits. It scurried off the sidewalk and I got in the car and turned on my camera. While he/she (I haven't seen any boy things so I'm guessing a female. 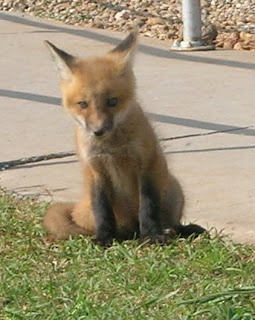 So, while she was hiding I slid back out of the car and walked quietly over to the curb and sat down, camera at ready and aimed where I last saw her and her sib. 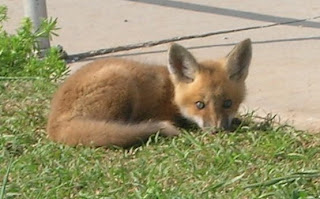 Click, click, click as fast as I could at nothing, but at last a head poked out. She looked at me. I was very still and probably 5 feet away and maybe she thought.."hmm old lady won't be fast..it's safe to come out". And up she popped. Sat for a minute and then started playing tug of war with the one still down under the sidewalk. 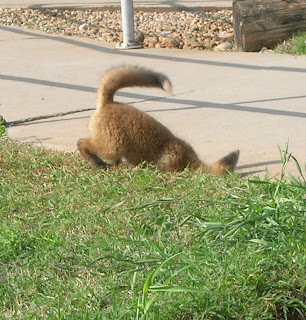 I keep clicking and half the time the sun makes it impossible to see the view screen thing. So, it was a lot of surprise (and a lot of pictures of the sidewalk when I uploaded them). I finally just sort of clicked and watched her play hoping that I was capturing some of it. I totally missed "dinner" until I cropped them on the computer. 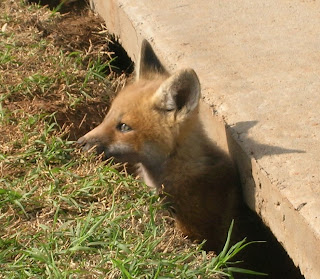 There was nobody around, not even any traffic. But then a couple of cars slowed down and I really don't want a lot of folks to know they are there. I'm so scared someone will kill them. I can't say I stood up quickly..that's not possible. But I got to my feet after about 15 minutes and tried to make fierce noises and they hid again. 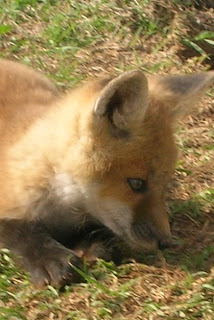 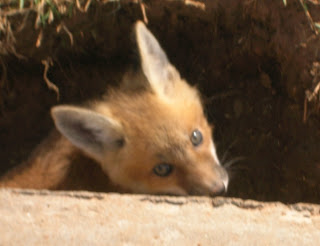 How adorable! Thanks for the treat.

So cute! I hope nobody calls animal control on them and they get to stay a while.

OMG! They are adorable. Look at those little faces! I hope they will be safe...

Oh, they are so sweet! I hope they'll be okay. It's so sad to see wildlife like this have to deal with "city life."

Are you coming to Rendezvous this year?

what great shots you got seeing as you were shooting blind really.... wonderful...

Wow! Were you a professional photographer in a former life? Great wildlife shots, seriously. You did good!

Much better pix of fox than ones I was getting.

OldLady Of The Hills said...

Oh, these are such sweet pictures!
How wonderful that you had your Camera right there and you could catch these little dears, doing their thing! Thanks so much for telling me about them.

Hoperfully, I will be putting up some pictures and two little Videos of one of The Hawks and 'a friend' tomorrow A.M.!