We maybe got a couple of inches but most of that blew right away. I got really excited in the middle of the night when I peeked outside and noted that the trunk of my car was level with the roof due to the piled up snow. Then, I realized that there was hardly any on the front and even less on the ground. So much for my snow storm. :-( I guess I should be thankful instead since in the Panhandle they got like 24 inches and roofs were collapsing. I'm certain mine wouldn't hold up in somehting like that.

The personal wedding shower was extremely fun and especially since there were women of all ages there. It was nice to be out and about and laughing so much and having such good food! I could have made a pig of myself but I behaved with great restraint.

The dishcloth was completed. It's a designer dishcloth..Debbie Bliss! But not designer yarn..simple Peaches and Cream. I think I'll give it to the bride-to-be..there is always need for a dishcloth tucked in with something a bit more exciting. 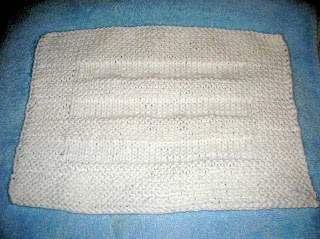 And since I don't have any snow pictures, I'll share this picture of tonight's sky about sundown. There's hail in that baby and we got some pea sized hail here. It was fun standing on the porch watching it roll in. Mother Nature surely puts on an interesting show. 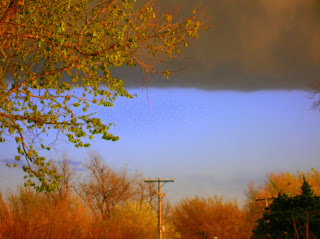 Is it me - or is the weather getting weirder each year? One day it is cold and gray - the next 60 and sunny...

Wow that is some looking sky. Hey have I ever told you that you are the sweetest!!!!

Our sky is looking like that tonight. I can hear the thunder off in the distance. Oh boy!

Glad you had fun at the shower. It's always fun to get out with people, especially happy, fun people. The food never hurts either. LOL

Love that sky picture. That must be the evening my stepson called me. He was driving between Oklahoma City and Stillwater and called to ask me to check the national weather service and see if there was a tornado warning or anything.

You guys have had some crazy weather lately, no?