It's been a calorie laden week here on the prairie. Monday night found me having dinner with friends. Homemade potato/broccoli/cheese soup to die for. And an assortment of meats and cheeses and lots of embellishments for sandwiches. We chose what we wanted to eat. I nominated the sandwiches. I love, love, love making big Dagwood type sandwiches but in a house alone, the lettuce goes bad before it's eaten or I'm terribly tired of ham/turkey etc. So this was a real treat for me. And the soup...OMG I just wanted to sleep in it. Sooooo rich and very good. A little wine, some fruit and lots of good conversation. And on a Monday of all days! Too fun.

Then it was cake at home time. When I was little my mama used to make this dessert that she called Cottage Pudding. To my little brain, I thought that must mean we lived in a cottage since we ate it in our house. It was basically a rather bland whitish cake that you served with a warm, clear nutmeg-y sauce over each serving. She gave me the recipe for the sauce, but told me that you could just use any cake..a cakemix white was just fine. Well, ya know...it just wasn't right. The cake was too fluffy. The original was more dense. Sort of like eating a great big fat soft sugar cookie, or so I remembered.

So, fast forward to 2007. And an ad in the mail for a repro Betty Crocker cookbook. Since I cook so often (not!), a cookbook wasn't on a want list, but I really wanted this one. And, since it could be paid off in 4 easy payments that were certainly modest, I ordered it. It arrived Saturday and I've spent quite a lot of time curled up and reading it. And then....shazamm, right there on page 221, is Cottage Pudding. The sauce recipe was right and I tried the cake and YESSSS! Of course, I've eaten the whole cake. Well, it was just a little cake...sort of..in an 9x9 pan. 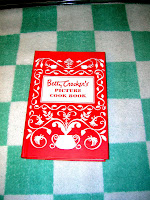 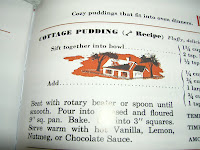 I figure that all the stirring wouldn't use up the extra calories, but maybe a bit of knitting would help. So the second sock of the long-ago-started socks came to life last night. I have no idea why they were stopped before. Must have been something major to distract me. But we're happy together for now. 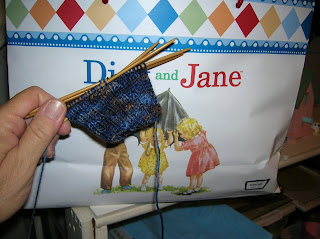 Zoey says she will just lick her foot and ignore me. 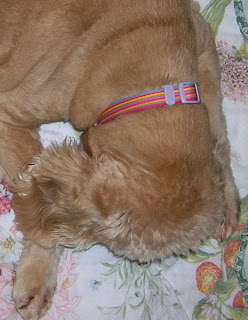 thanks for your comment on my idiotic metal knitting scarf :P

Good on you for starting on the socks again! I finished one yesterday and feel like wearing it 'proudly and singularly' as the Harlot would say, because it's like wearing fairy dental floss - so soft and a perfect fit. I always thought sock knitting was completely pointless, but now I've been converted! Do you use the same pattern over and over? I've been trying to come up with a basic pattern I can learn by heart...like 3x1 rib and a heelflap, or something like that,
all the best
Cat

Simple desserts are the best! Congrats on finally starting the second sock.

Cat, aren't they great? I was so happy when the weather got a bit cooler so my feet wouldn't smother in my socks. My go-to pattern, the one I learned on, can be found here. http://www.cometosilver.com/socks/SockClass_Start.htm
And the majority of my socks are simple ribs, although occasionally I get out in the world and do something a bit different. I loved doing Monkey and
want to make another pair of them in a more solid color.

Devorah, yes they are but I think I'm not supposed to eat a whole little cake in 2 days! :) My fingers were quite happy to have sock needles in them again.