Where I Mess Things Up

I've already told you that I'm nosy. And I love to see other people's spaces whether I know them or not. There's just something so interesting. So I was delighted when Dave showed off his knitting/spinning space and had links to other people's. But, I figure fair's fair so I have to show you mine. As bad as I would like for it to be, it's not worthy of being featured in a magazine unless maybe there is one called ...well, I'm not going to go there.

This is the "curl-up" place to knit. It's never this tidy as usually besides myself, there's at least one cat and a mug of tea or coffee and who knows what else. I took advantage of the cat's having supper while Zoey was outside to get this shot. There paws are involved though as that throw is supposed to be on the back of the loveseat.
You can see in the lower left a round box. It holds most of my needles and all sorts of other stuff. It really needs to be cleaned out. The little bag with polka dots is currently the sock bag. That's open to change. Sometimes I use the one that clips to your beltloop, or my pretty pink bigger one. Just depends on the day, I guess.

The cigar boxes on the cedar chest/coffee table hold stitch markers and little balls of waste yarn and rulers and needle gauges..that sort of thing. 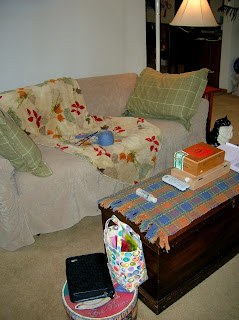 Inside the cedar chest are several groups of yarn. It's not full of yarn (I wish), for there are other throws and pillow covers and stuff that's for this room in the bottom of it. Used to be a real pain in the butt to find anything, but some judicious recycling of a copy paper box and a Christmas box makes it much easier to get to the lower half. I'm quite fond though of just gazing at the colors. And wondering why I still haven't unskeined my Cabin Cove or why I really don't want to knit my Cherry Tree Hill. They are just there for petting, I think. 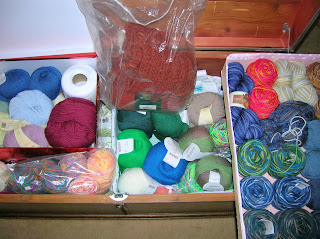 Then there is the Playroom. It's about all sorts of projects and only recently came into being so it's still a work in progress. It was a bedroom. Last bulky trash day the old mattress etc went bye bye and it's trying to find it's way. But with the keyword up on the wall, it knows the way to go.

It's a good room to use for things that need a lot of light (like an intarsia chart) and/or somewhere to spread it out. I can 'drive' my dining room table in there easily and set up the sewing machine. If I want to cut fabric (NOT my favorite thing to do), I elevate the legs of that table on bed risers which brings it up to the right level. I cut out much more happily if my back isn't screaming at me. The shelves in front of the windows originally were full of plants headed for a Walmart. Once they were unloaded, the shelves were scrap but I grabbed them first.

Since I can't actually see the picture on here, I've sort of forgotten what all you CAN see. There's a chair. It's really a lawn chair covered with a quilt..Mid-century Modern and made from double knit fabric. *G* Oh and the lovely footstool...another copy paper box, painted and "upholstered". And the magnificent old bedspread on the floor for Zoey. She has a for real bed in the bedroom but she really prefers this. It's hysterical to watch her "arrange" it. 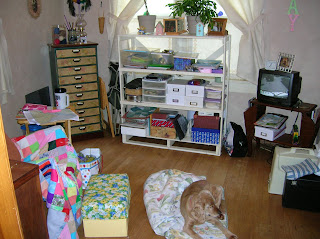 I had knitting to show off...but then..well, trouble. First of all, Laura wanted to see my intarsia..the first. It's over 1/2 way through, having been restarted 3 times. So I took a pic of it Friday night. 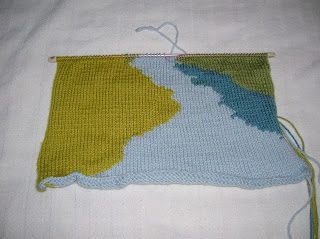 Then I thought that I would wait to post until I had even more done. It had been several days since I'd worked on it, so first I made sure I had all ends woven in. Usually, I'd just quit whenever I was tired and then the next time I'd weave in any ends. So that done, off I go. Well yesterday, I discovered a glitch a couple of rows back. I should have just put it down..I was tired, it was late and obviously my brain had turned off. I'd woven the ends in so well I couldn't get them out, so I thought I would just cut it and go back to the row before that. Uhhhh you can't just pull on the yarn and have the whole thing unravel at once. So now it's just a mess, with some areas raveled back farther than the next color. I'm going to have to think about this. Or...start over. I do enjoy doing it. 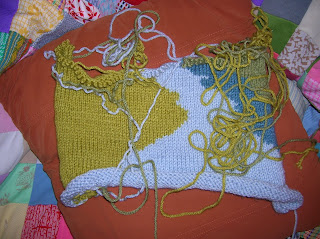 Then there's this felted bag. Somehow in my magnificent mind I had decided that things shrink in width more than in length (it's the opposite) so I knitted this hugely wide bag. Uhhh, it's still way to big to do anything with. I'm thinking maybe saddle blanket? Rug? Or cut it up into smaller pieces. 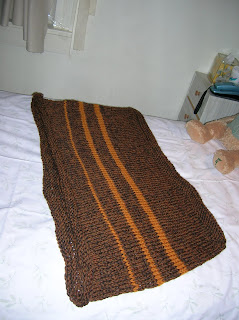 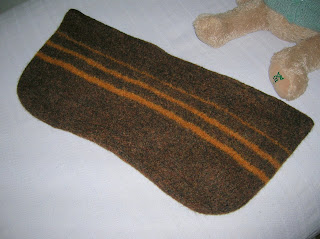 I'm thinking I'm going to work on a sock. I have one started. Just a plain 2x2 ribbing. Maybe I can manage to do at least ribbing without messing it up. Or maybe a nap. /shrug
Posted by Susan at 10:52 AM

Thank you for sharing your home. I can't wait to see the Play room fully realized.

How about cutting the bag in half and turning it into two bags?

Yup, it's just as clean as I figured it would be! I'll have to do that when we get back next week. "This Old House" is coming right along, but sheetrock is what I get to decorate. LOL
Sorry about the knitting, but it's pretty!
Sheri in GA

You have a really clean and comfy space. It's all about comfort, especially when it comes to relaxing and knitting. Thanks for showing it off!
Oh, cute pup, too. :)

Devorah, it may be awhile before it's really ready for prime time. Or never. The best part is that since it's not in the main stream of traffic, I don't see a mess when I walk in the front door! And it's usually much less neat.

Sheri, heh...yeah the idea was to clean house and quick! take pics. :-)

Dave, I totally agree! And the older I get, the higher comfort ranks on my list. Cute pup was getting rather irritated with me. She hates the camera and I just wouldn't quit!