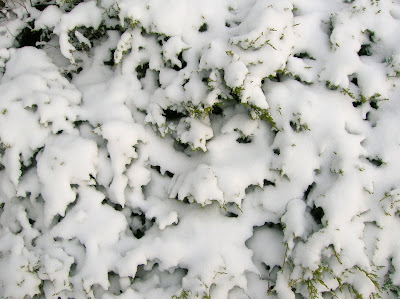 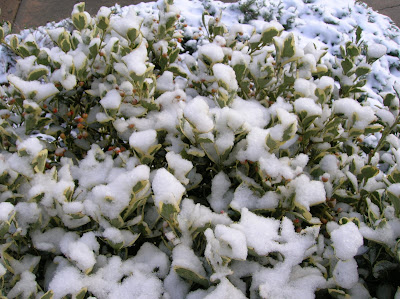 of snow is all that fell yesterday. I'd heard predictions of from 4-6 inches but it swerved northward before it made it this far east I'm told. Still pretty coming down. I think we got maybe an inch. Still sticking to the grass and bushes but the streets are just wet.

I had big plans for fun yesterday but except for finishing up the holiday cards, I spent most of it curled up on the couch. That respiratory stuff that I had a couple of weeks ago came back with a vengeance on Friday. Didn't feel really bad but was coughing a lot by the time the work day was over. Fed the animals, threw a load of clothes in the washer and started shivering like crazy. I was so cold. It was cold outside and I thought it was just that my bones were cold. But a bit later I caught a glimpse of myself in a mirror and my ears were as red as Rudolph's nose. Uh oh..temp of 103. So dosed up with Nyquil and headed for the couch. Where I remained until 3 am and my fever broke. Again I was freezing LOL. Changed into real pjs and read a blog or two and headed back to the couch. The cats were thrilled. There's no way I can sleep on there without major cuddling going on. Someday I will maybe get a regular couch instead of a love seat.

Woke up feeling a bit better although all my muscles are so sore from coughing. I was truly glad I had no errands to do but a bit sad that I felt too bad to do any of the fun things I'd lined up. I won't complain though. I could have been as unlucky as Katya...geez girl!

Oh, I'm wondering if any of you know about the legality of buying prescription drugs from Canadian pharmacies. And if you know of some that are really legit. Apparently I'm not googling right because although I can find lots of Canadian pharmacies, I can't find the answers to my questions. I buy my meds from our hospital and get a good deal on them, but they cost several hundred dollars a month. They deduct from my paycheck but they never deducted the total amount, instead they deducted 1/4 amount every pay period (every two weeks). I was really happy with that as it allowed me to pay bills, buy food for me and the babies, and even some yarn and fabric now and again. But a new policy has been instituted. The $9++ that I'm behind will be deducted in equal payments from now until July 1st..which will make my take home a bit larger. However, all meds must be paid for completely when you get them. I just can't quite figure out how I'm going to do that. I am amazed at the difference in Canadian prices. For some of the really expensive ones, it's like 50% less. Something is wrong with that picture. I'm going to talk to my PCP about maybe switching some of them to less costly ones, but I've asked my cardiac doc before and he's always said no. And they are all working well. /sigh. I'm sure I'll get it all figured out eventually.

UPDATE: I found the info so you can just disregard :-)


In the meantime, Hershey says a nap will make everything better. 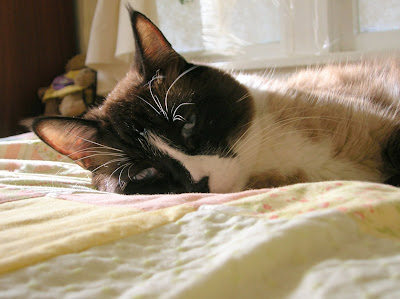 Damn, I am sorry to hear that you got that yucky "bug" back! I keep looking out of my window and it keeps dropping stuff out of the sky...and blowing...

Hope you feel better - just cuddle up with a good book and relax. I think Hershey has the right idea!

Sara, I think you need to do the same! And congrats Grammy!
He's just adorable!!!

oh! Sorry you are sick again. There are some nasty bugs going around now. (Trust me, I know. Sniff, sniff, cough cough.) That business about the drugs is nasty. I hope you can find a solution.

Do you have the ability to order your RXs by mail? Sometimes that can save you quite a bit of money.

Good luck--I can't wait to see how much I owe urgent care for stitching up my hand. Yay for having insurance that doesn't pay for crap!