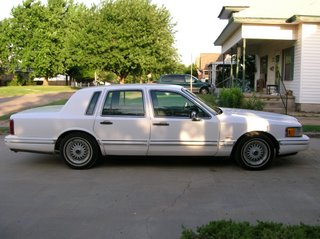 Way back when, I made a comment in one of my posts that I had heard of a car that was for sale and I was interested. It had been recommended to one of my FOC by a trusted mechanic, (who had told me that my current vehicle was terminal and outside of a new engine we weren't going to be able to save her. But when I checked on it was told that the woman's stepfather was buying it. Oh well, ok.

So time passes and yarn gets dyed and flowers bloom and packages get mailed. And I get a phone call at work from the car's owner saying that he didn't show up when he said he would and she's selling it NOW. (I think she was a bit pissed) So Thursday evening my friend and I go over to look at it. There's a problem with ...uh I don't know what they are called. Some sort of leveling airbags or something that's over the back end. We drive around the lake and it's like riding in the back of a pickup. Nuh uh. We go home and call to see how much it costs to get them fixed..approx 1K and although it's priced at half the bluebook, I can't do it. I don't have any money to get it fixed. Boo hoo. Take a bath.

Phone rings..tis the seller saying that she's fixed the problem with the help of her brother in law. Seems there is a switch that turns these things off since if it's up on a rack it's not a good idea to have these things inflating/deflating to level the car. Or whatever. And, when they had had the A/C converted the AC man didn't turn them back on. OK..we'll go back tomorrow (Friday) We meet her at her lunch time, take another drive, smooth let's do it. Now it's Friday before a long weekend and we're short staffed at work already so it will have to be next week before I can go to the bank to see if I can get the bucks since I have maybe $60 in my checking account. Oh ok...I can swing by and fill out the app but that's all.

Whew this is making me crazy. Back to work for a long lunch time meeting; get through with that and get settled and trying to catch up on my work. Phone rings, it's the bank...sure you can have the money but you'll have to come now cause we close at 3. So off I go, sign papers and get cash!! That was fun to have that much in my hand for a moment. Pay the seller and drive back to work in Lily. She's a '94 gas guzzlin' Lincoln Town Car. Rides smooth as a baby's butt. And I'm too broke to go shopping! But it's soooooooo nice to know that for the first time in 7 months I can at least go to the grocery and know that more than likely I'll get back home without dying at every stop sign. I had checked out so many cars but if I could afford them they were pieces of crap and I never really thought I'd find one.

She's really sweet. And while Lily suits her, I'm thinking that after we get to know each other a bit better, there will be times when I'll say "Hey Lil, let's head for Guthrie and check out that yarn shop" :-)
Posted by Susan at 4:40 PM

Excellent!! Excellent!! Sorry it's a gas guzzler in these days of *gas-so-high-we-hafta-walk* however, for the few times you go into *big town* I'm sure you will be smilin' all the way!! Cograts on your great purchase!

Very pretty design! Keep up the good work. Thanks.
»

Great site loved it alot, will come back and visit again.
»