I really love old buildings, and I'm nosy... well, make that curious. It sounds a lot nicer. And one of my fantasies is to live upstairs above a shop; of course, I own it and it's thriving. Perhaps I read too much.

However, when the chance to explore the upper stories of some of the buildings downtown, I jumped at it. It was part of a Paranormal Convention held here last weekend. I would have loved to attend everything, but I found out about it too late and it just wasn't in the budget. This part, though, I could manage nicely.

So after a brief rest after the alpaca adventure, off I went. With new batteries in the camera and drivers license and keys in my pocket, I wasn't burdened with a bag which would leave my hands free and me a bit more mobile.

There were 4 buildings on the tour but I will just tell you about 2 of them. One of the others was basically just walking through some attorney offices (?). The 4th was quite interesting and my guide, a young man in character was delightful but I have no pictures. More about that later.

The is known as the Babcock Building. 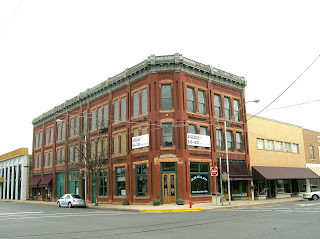 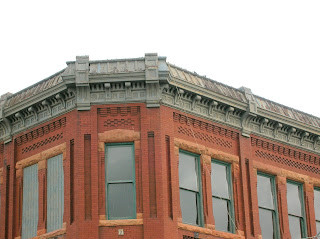 It's housed a ton of different offices on the upper floors and a lot of shops on the bottom, but now only the first floor is functional. There was a secret door. One of those hidden in paneling. Each floor above it had a hole in the floor in that space. Not big enough for an elevator..actually I'd guess about 2 feet square. Your guess is as good as mine as to what it was for. And although this floor wasn't safe enough for all of us to walk out on, I'll have good "image ups" about this being my parlor. And it's snowing. And I've brought up some lovely yarn from my yarn shop. And I'm knitting something beautiful. Dream on. 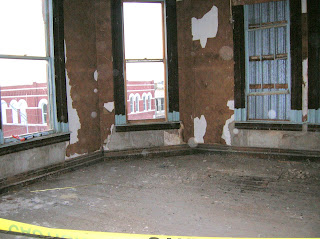 And this is now known as the Russell-Murray Building and houses a hospice business. Not patients, but the staff and management have their offices on the first floor and part of the second. 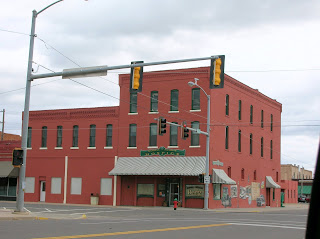 I actually did this tour twice. Once while it was still daylight and then again just before I went home. I had two different guides, so I got a lot more information. It was built to house a grocery on the first floor and a hotel on the upper floors. Later, in the 20's, there was a bordello on the upper two floors. The 2nd floor had the better quality "girls" and two bathrooms! The upper floor had one bathroom, and screen doors just like you'd have on your house for ventilation. I can only imagine what it must have been like on a hot summer's day. Ewww! One of the doors on the second floor had a peephole with this little doohickey that you could slide back and forth. Not, however, so the room's occupant could see who was in the hall. It went the other way. So that the person in the hall could see into the room. Hmmm.

They had gathered some things with the idea of setting up a little scene in one of the rooms from when it was a hotel, I guess. There was a bed made up, a rocking chair and this dressform which I'd love to have! 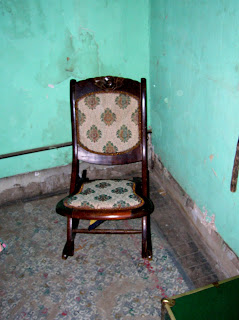 Three folks were getting it set up, and one of them asked the others if they believed in ghosts. And, then the rocking chair rocked back and forth three times. Everyone had been standing still, just relaxed. And the one that told the story is someone I trust and who has an excellent reputation for not being a flake. So...hmmm.


There were decorating ideas galore. I could live quite comfortably with this linoleum. 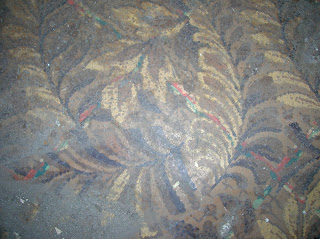 I might have a bit more trouble being comfortable with this wallpaper. 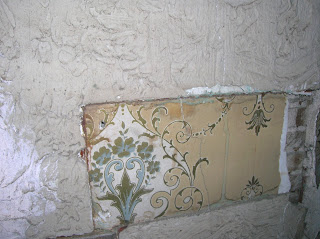 There was all kinds of stuff in this building since the upper floors hadn't been used for anything but storage since probably the 60s. Unfortunately much of it was removed by thieves. What's really scary is that a lot of it was done at night while the hospice administrator worked late. The thieves apparently put a ladder on the flat roof of the next door building and then climbed in a 3rd floor building. She said she would, at times, hear noises but attributed them to pidgeons. Scary.

They restored the woodwork on the areas they are using...it's a beautiful space. But some things hopefully are being loved and cared for elsewhere. 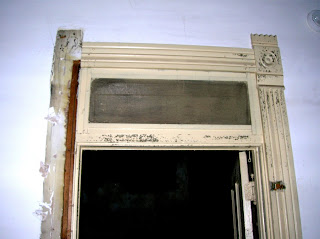 One thing that I found really interesting was that apparently people had much smaller feet when these buildings were built. I wear a size 9 shoe, which isn't tiny. But in almost every building, I had to come down rather like a crab because the stairs were so shallow. We even measured, and with my heel way back against the back of the stairs, my toes were way out side of the step's edge. They probably wore them down going up and down stairs. Since all of the ceilings were really high, so were the flights of stairs!

Remember when I said I put fresh batteries in the camera before leaving? I can go a long time between battery changes, but I carry extra ones in my bag. The interior pics you see here were taken in daylight without the flash (although I had to do a bit of highlighting in Picasa). And there were probably a total of a dozen pictures taken before the batteries went *poof*. I had to go out Sunday to take the exterior pictures. Perhaps there were some things that didn't want their pictures taken. /enter Twilight Zone theme.
Posted by Susan at 7:01 PM

VERY cool tour, and I love these types of old buildings. We don't have many left here in Boston, but I'd love to get a chance to go through some.
As for the batteries going dead, that IS a sign of paranormal activity. It was on Ghost Hunters just last week.

Thank you for the way cool tour. The paranormal is outside of my realm of experience though my boss did show us how his shredder will just start up when he talks on his walkie talkie. Hmm ... paranormal? I walked over and turned the stupid thing off.

Oh Dave, love Ghost Hunters. Patrick, from Haunting Evidence was here for the convention. Alas, I could only imagine I saw him. :-(

Devorah too funny! When my mom was still here, I had a baby monitor by her bed so I could hear her if she needed me in the night. Most hilariously, I also got to listen to a couple setting up illicit assignations. I'm not sure if it was a cb or some ham radio or cell phones.

We had a couple of possessed appliances, a tv and a dishwasher, that turned on for no reason. They were too old to be automatic and would only shut off when unplugged.

It's horrible here in Kansas City, all the old buildings I can't snoop through. We go on the Parade of Homes tour every year, just to see what all the new homes look like on the inside. :D Nosy, but very fun.