Basically that's what I've been doing a lot of during the latter part of the week. I am 'blessed' with recurrent corneal erosion and this seemed to be a time for it to rear it's ugly self. So lots of tears running down my face. And a really red eye and puffy eyelids and why does your nose have to run if your eye is tearing??? Do you know why your eyes get all red if you've been crying? It's because tears from crying or irritation or hay fever are not the same stuff as the fluid that normally hydrates your eyes. So this week has been a week of lots of artificial eye drops and extra heavy duty stuff for night time. And looking closely at anything is difficult because of the pupil constricting etc. So...therefore, nod. I've had a lot of short naps brought on by being bored with my eyes closed. It's much better and the eye doc said on Friday that she was impressed that the abrasion on top was healing so well and quickly. I think of it as being like peeling nail polish.

There has been some knitting. A Fetching was finished early in the week and there is another one on the needles. Maybe soon, a pair. I tried a pic, but one of the cats was quite interested in helping so mostly I got the back of a cat head with a wee bit of mitt showing.

And a sock that was the victim of some showboating on my part has been fixed.

And I totally don't understand another pattern. It's so simple but it seems all backwards to me. I think I shall try a swatch...just do what they say and see what happens.

Oh, and I think I am not meant to do P3Togethers. I thought about doing the row before on a giant needle, sliding the stitches onto a smaller needle and then purling them together. Wonder if that will work?

First frost was this week! 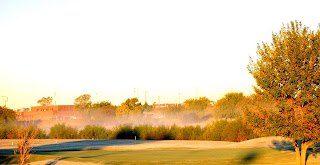 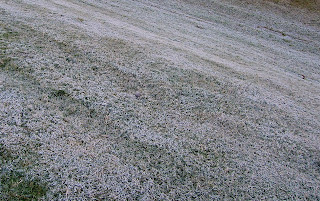 Which led to this...getting ready for bed with flannel jammies! Yay! 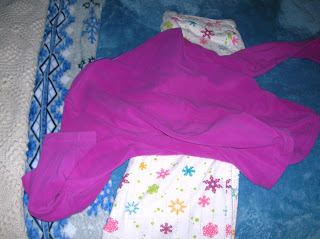 First off sorry to hear you've been having eye problems...Me a damn bladder infection - No idea where it came from - but it's the one I get every three years or so!

You are getting out flannel jammies - you live in Oklahoma for heavens sake - I live in New England and it's not time for flannel jammies yet! I love flannel jammies...and the great part is you can wear them all day long if you don't have to go anywhere! :)

Sara, ooooh hope you are feeling better. As far as flannel jammies go..ok so I push it a bit. And, if they're old and thin, they still count as flannel but are more like regular cotton :-)

Owie! Sorry to hear about your eyes. Know what you mean about the flannels. I've pulled out my flannel bottoms, more because I really want another blanket but don't want to break one out until I am sure the buggies are all gone.

EEK.. I had flashbacks to a few years ago- when I was in the gym.. (I don't think that anything bad should happen to ANYONE while in the gym do you? I mean really!)

AND.. while I was moving from one machine to another- something 'jumped into my eye' and it was so bad.. I couldn't open my eye up, couldn't see, and the pain was unbearable. I actually had to call someone to come and get me.

I went to the ER.. (since, it was worse 2 hours later) and I found out that I had scratched my eye.. and had to keep my eyes shut (no problem doctor.. I couldn't open the eye!) and in the dark.. (again, no problem.. doctor, since, any form of light.. (even from opening the fridge was painful) I didn't have a stereo at the time, no books on tape.. so, there I was..

LAYING DOWN.. bored out of my mind for 2 days/nights.... unable to knit, read, or watch tv. I guess I should have turned the tv on, loudly, and listed to it from the next room? (since, the light flashing from the tv was too bright w/ my eyes shut)..

Devorah, when will the blankets be safe?? And how will you know? I'm hoping that it's soon because it would take a long time to knit one for each of you.

Oh yeah, Iwould...exactly! This time it wasn't quite as bad which isn't saying a lot. Actually you weren't supposed to be watching tv anyway because your eye would move around..and you'd blink too. eek! No blink :)