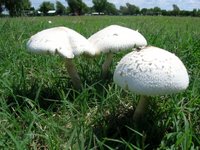 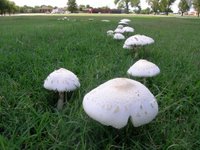 dancing in the park after dark? Oh I do hope so. The rains of the weekend have brought a plethora of toadstools. And so, lunchtime drivers got to view a woman of a certain age on her hands and knees with butt sticking up in the air taking pictures of them. Probably not the most scenic view for them, but there ya go. I thought for awhile that there was going to be a huge circle of them. But it curved around and then stopped. There were little groups all over the park but I liked this group in their curving row. I could imagine all the fun the fairies would be having after the sun went down. The rains have made the grass soft again, instead of crunchy. And the temperatures? Oh wonder of wonders it has cooled off! In the low 80s yesterday and this morning at dark thirty it was 64! After 38 days of 100+ temps this is the best thing ever!

I mowed and weed eated last night and didn't even feel like I was going to die! How fun is that?

Knitting, crafting, sewing. Well yes. The Harlot sock #2 is in time out since Monday evening. Mostly to protect it from me. I was just a wee bit upset LOL. So I've started a scarf using this pattern from straw.com that Ann shared with us. It's fun and perfect for tv watching. And I 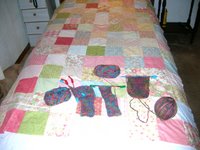 haven't screwed it up yet! I did have to send a HELP to Ann, because as she said, sometimes I think too much, but she very graciously explained that the pattern really would work LOL. I took a picture of it by itself but since it was still dark outside I used the flash and the colors changed completely. And yep, once again I am using a dpn with a rubber thingy on the end as my needles. After mostly knitting on socks, those longer needles feel very awkward.

And this weekend I sewed all those fabric squares together for the summer cover (before I lost them again.) I'll have to save up for the sashing and backing but at least maybe it won't disappear in the meantime.

And remember all that fabric I bought awhile back at the auction? Well, it's been in time out in trash bags until I got around to washing it. So that started last night. The first batch is in the dryer as I type and I think a lot of pressing is in my future just to get it ready to be put up again.

Ya know, it's nice to know that we all have sock issues at times.

I love that second photo of the mushrooms. The field of depth really draws you in. And the mushrooms do have the look of fairie dancing.
Congrats on making progress on the summer quilt. It's a nice range of colors.

((HUGS)) you know I feel your happiness about the cool weather as no other person besides Oklahomans could. I even stayed home a 1/2 day with my sick 3.5y/o just so I could sit on the back porch and take a nap while she did since it was so cool! Only a bummer that it will be almost too cool this weekend. We are going to Grand Lake.

Thanks Dave. Someone at work joked that my camera was my best friend. More like a lover, sometimes it works...sometimes it doesn't *G* But I can honestly say that I've sure gotten my money's worth of enjoyment from this purchase.

OOO ... those pictures are wonderful! Surely there will be fairies!

I love that scarf pattern. I am addicted to knitting that darn thing.

The true test of the toadstools is if you find Dave dancing around under one of them...

They mowed down the ones in the park, but overnight my back yard sprouted a bunch of them. I have to go out and get the poly cart and I'll peek under them to see if maybe Dave is sleeping in *G*