There's a Moose on my Desk!

Came home yesterday, scooped up the mail and put it on the desk. Did the feeding/watering/pet tending thing and checked eMail. Had an unsettling one to deal with and think about and then of course, there was the "milk run". So the mail slept quietly on the desk until this morning. As the computer booted up, I went through it. Cable bill, solicitation for 2 credit cards (not that they would approve me in reality..American Express, I don't think so LOL), information about a newly forming quilting group here, and.....an envelope with the famous Dave's addy on it. This is amazing. I even used the letter opener to slit the envelope! (I do that for really important stuff). And inside was this... 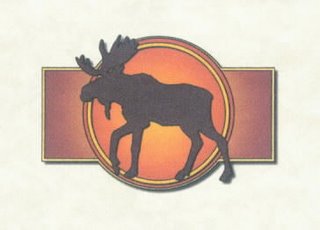 how cool is that? Dave has sent me his business card! Aha, it's a fold-over card so I open it to read all the info fit to print and the first lines say.."Someone special has purchased a Gift Certificate for you" WOOOOOOOOOOOOOOOOOOHOOOOOOOO

My color pal has come through in a really really big way. I'm gonna have me some Cabin Cove yarn!!!!!!!!! I'm so jazzed and feel like King Midas...err I guess that would be Queen Midas unless I get dressed up in some really butch clothing!

LOL I was going to scan the inside of the card so you could read it, but fortunately realized that my secret code number would be out there and someone else could get my loot.

I'm not sure when I will spend this. I love all of his yarns, but sometimes one just leaps off the screen and says "I want to be yours"! But until now, I wasn't able to grant that wish. So, I shall save it for that day. And in the meantime, I'll just look at the card and feel really, really smug. And wayyyyyy lucky!

Heh heh heh, you have a great secret pal there. And three are MORE surprises from what he/she/it has said....

Yeah, that Precious Metals had me from hello. There's about three different shawls in the finals for this yarn. I love it. Now you'll have a tough time deciding which to choose. :)

Whenever I get an order from Dave, my kids say "there's a package today from the moose guy."

He finds a way to make everyone feel so special. What a great businessman he is.

Wow! Looks like you hit the jackpot! The Yarn Lotto! The Big Bonanza! How fun is that?? Dave's card is cool, too. I bet you do have a great time with all of that!