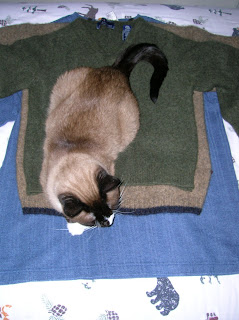 Early this morning I stacked the two felted sweaters on top of an XL knit shirt I have so you could see how much they shrunk. But the sleeves on the tan one were really bothering me. So back in the pillow case it went and spent more quality time chatting with tennis balls and old jeans. I find it fascinating how different fibers felt in such different ways and times. Now the tan one is about the size of the green one and talk about bloom! Whoa, one fuzzy piece of fabric. I put it and the rack outside for awhile this morning so that the strong breeze would maybe give it a head start on drying but mostly it became adorned with bits of dry leaves so back in it came.

The rest of the morning was spent putting up new plastic on the bathroom window and one of the living room windows and washing two of the blanket curtains. At least two windows are now all clean and fresh for winter. The other ones would have been but the lovely town water system decided to belch brown water so laundry came to a screeching halt.

What's a girl to do if she can't finish the curtain washing? How about shopping? Off to Michael's where they had yarn on sale. I've been wanting to try that Paton's SWS so I got 4 skeins of that and 3 skeins of Paton's regular wool..I forget it's real name and I'm too lazy to go look.

I stopped at Barnes and Noble and did not buy a single thing. This is history! I did look a lot though. The new Spin Off has an interesting article about sock knitting machines. I saw a box of knitting pattern cards called "Hat's, Mittens, Scarves" I really wanted them..I think because I liked the picture on the front and I thought the little cards would be cute. But I'm a little hesitant to buy something that I can't see inside. What if they are all really weird or something. So back on the shelf for them.

Then off to the for real yarn shop for something they didn't have and then home to the still very damp sweater.

But I'd been thinking about wet felting. So after supper was cleared up I decided to experiment. The only roving I have is gray but I wanted something with some color. So off to the play room and the box of needle felting roving stuff. I put a piece of some sort of net/kinda looks like an old timey curtain fabric on a tray. Pulled off some pieces of the roving and kinda spread them all out and then went back and stacked the next layer going in the opposite direction. I could have put more on there but I didn't want to waste it in case it was a disaster. 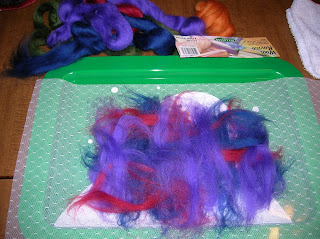 Then I folded the netted stuff over it and wet it down with soapy water. And then I kinda massaged it with my hands. When it was kinda stuck together so I could pick up this sandwich, I put it on one of my rub boards and rubbed it really well both vertically and horizontally and catty corneredly, then flipped it over and did the other side. So now I have something else to watch dry. :) 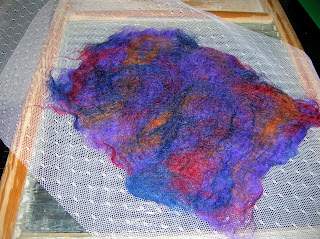 If it works, I'll be asking for sources of small amounts of roving. I do so love making messes and playing in water!

So how was YOUR weekend?
Posted by Susan at 6:11 PM

That certainly looks interesting. Love the colors. Can't wait to see what you're going to do with it.
Sheri in GA

I have bits and bobs of wool roving that I can contribute to the cause!

Sheri, knowing me I shall probably put it in a drawer after a bit and totally forget I have it!
Devorah, have you ever dyed roving? And do you know after you dye it, does it get all soggy looking. Well..I mean after it's dry? Uhhh...maybe I need to think on this question a bit LOL