It's the time of year that I dearly love. I love the colors of the turning leaves all gold and red and bronze and maroon. (and I really want some Turning Leaf wine just because of the name. Has anyone actually tasted it?)I love walking through their crunchy brothers and sisters that have fallen to the ground. It's just THE best thing.

And every year it's the same. I can't remember when the leaves are supposed to be turning and falling. I'd be happy if it started in September. An old farmer once told me that when the leaves hang on to the tree for a long time, it means a bad winter. And that winter he was correct. But, if you don't know when they are supposed to fall off, there's no way for me to know if they're late. Well, I'm thinking if it was January it would be fairly obvious. 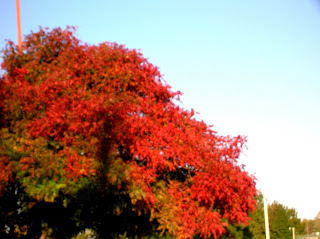 I have no idea of what kind of tree this is. This rather blurry pic was taken from the parking lot at work using the zoomy setting. And was accompanied by some quick movement when someone drove up behind me and honked their horn. I wanted to show how it's turning color in sections. The next one is better, and taken with me balancing in a shrub bed. Oh, and because it was only fair, I'll share a photo of one of the shrubs. Don't want to be playing favorites. 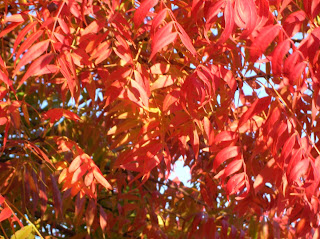 House stuff is as done as it's going to get. My friend Jackie and I are going to take some food over to another friend's house. Her m-i-l recently died and is in route back here for services. There are a lot of relatives, and after talking to her, it was decided that we'd bring a bunch of stuff for sandwiches rather than hot dishes. We really need to get going because I bought a big amount of shaved ham with the idea that I would take a small portion of it for my supper last night. OK, so I had more than one sandwich. And am working hard at not eating more. Would be a bit embarrassing to arrive with just a few lonely pieces of ham in the meat packet. 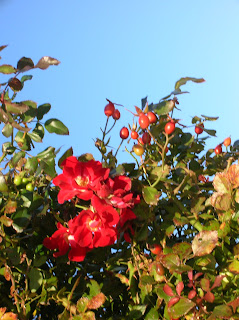 Beautiful colors! This is my favorite time of year too, I love the cool, crisp nights and the warm, sunny days. We have only pecan trees in our yard and they're hanging on to their leaves this year. And are dropping TONS of pecans, finally! Time to get out there and start picking them all up.
That ham sounds pretty good! Did you save them some?
Sheri in GA

Ooh, pretty! Our leaves are only just starting to turn and I can attest that it is LATE!

Sheri, happy nut cracking! Are they papershells? Or the old timey kind?

Devorah, oh good, then I'm not losing it. As much rain as we had, the colors should be gorgeous if they ever really get going well.

We're just over the cusp of peak, so you should be nearing peak color right now. You all are about two weeks ahead of us for warmth, and two weeks later for cold. Lucky you! :)

If this is peak color, someone ran out of tree paint. We might get a bit of a freeze this morning and I would love to be able to find a batch of frozen mosquitoes so I could dance around them laughing!

Oh I so love that big red tree and the lovely cool weather we are having. If I can find a place with weather like this year round I'd be there. I see someone mentioned tons of pecans, our acorns are very abundant this year, my yard was one big acorn patch. Someone said when there are a ton of nuts it will be hard winter, we had it once and they were right, let's see what this year brings. Even though the weather guys are saying a very mild dry winter.

I've tried the whites in Turning Leaf and they were good. Go ahead and get yourself a bottle.