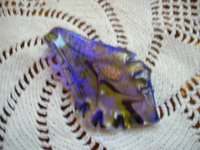 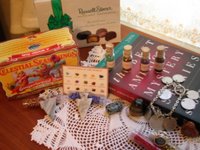 Before knitting took over my brain I used to lurk over at a Delphi forum called All About Beads. The folks there did incredible work and I was in so in awe that I rarely said anything. But I liked to participate in bead swaps and ATC swaps. The last two years I have signed up for a thing called Beads for Birthdays...a secret pal thingy. Well, I haven't been there hardly at all in a long time and had really forgotten that I'd signed up (my pal was in January so my part was over about the time it began for this year LOL). Until a box of goodies arrived yesterday. Look at all the loot. Did I score or what? I have no idea who my pal was since the tricker put MY return address on the box and the postage sticker was smeared. She shall remain a secret I guess.

In other exciting news from the homefront, it appears that my Christmas cactus will be blooming at Christmas! I've had this thing for years, and except for the Christmas I bought it, I believe this is the first time it's bloomed at the right time. AND, I lack the toes on the second Christmas gift housesock. Well, I haven't kitchenered the first one yet. Saving the joy, ya know! *G*
Posted by Susan at 3:06 PM

Wow! Lucky you! Use them well.

I have always thought beads fascinating. I am not sure I have the eyes for it anymore..

ok..maybe if I stopped being in denial and got the bifocals I should be wearing? Naaaaaahhhhhhhhh..

Gifts like that are really neat 'cuz ya forget they're comin' ... way cool indeed!!

Wow awesome booty!!!! Glad it was a good day for you. LOL My Christmas cactus doesn't bloom, it's sad, but it is growing and growing.

Ya know, I thought sure that I'd answered all these comments except Cat's. Maybe I forgot to post it after I sent the emails LOL.

Cat, I've heard that you need to put them in a dark place for about 6 weeks before Christmas. I did that once, and it bloomed in February LOL