It really is green here. The rains of the last two weeks have made everything just leap up and look for the sunshine. Today was the first mowing for my yard. Actually, last weekend I weedeated it. Not just around the edges...the whole darn thing. It looked like crap but at least the dog wouldn't get lost. My neighbor told me of a man looking for mowing jobs. He'd had him mow his and he was pleased so I told him to send him my way.

He arrived this morning about 5 minutes after I got dressed. In his mid-40s maybe..it's hard to tell. He's perhaps a bit slow but very nice. He looked at the back to see how big it was, and then I asked him how much he would charge. His reply "Whatever you want to give me". No way, I insisted that he tell me what was fair and he said he charged everyone $20. No way again...not for stuff that's about 10 inches tall and wet. I told him I'd give him more...his response was No, that that would make it too hard to count. I ended up giving him the $20 and then a large tip and suggested that he put it in the other pocket so it wouldn't get so complicated. He did a great job even trimming. I think I'll keep him *G*

So for awhile it smelled like fresh cut green stuff. The mint isn't up yet ...when that happens it will smell like a large package of gum. All enthused with this spring stuff, I decided to trim the hedge. I got part of one side done when I decided that it would be even more fun to audition for Dancing with the Stars. Unfortunately my pirouette down the steps probably won't ensure me a place. But it did put an end to the hedge trimming for the day. No serious injuries... just several scrapes and creaks to contend with..that and my pride.

Partially restored with a cup of tea, I decided on a new project. Wayyyyyyyy back in the fall I went to this Fiber Retreat here. And at the end of the last day, someone left grocery bags full of fleece for free. Well, I think it was maybe the trimmings that hang down. Sorry I don't have the vocabulary. Anyway it wasn't clean...but hey it was free!! So I brought home two bags and then they got lost in the abyss that's also known as the utility room closet. I found them today when putting up the shampooer (yep...all carpet is clean as of 8:30 this morning). I put one bag full in a laundry bag thing. Added hot water and soap in the washer and set it to soak. Whoosh as soon as the water hit it, the "scent" hit too. Ohhhhhh barn scents! Took me back to when I was a farm girl for sure. I let it soak for a long time, then rinsed it, then did it all over again. It's still not clean but it's gone to take a nap on the patio so I can finish the weekend laundry. I don't know if it will ever be clean. But it's fun..and all I really want from it is some sheepy curls. Maybe I should just find a FFA kid and see if they'll sell me a few.

I'll leave you now with a couple of pictures. No sheepy mess, promise. But I hope you like my redbud tree and these iris leaves that have just shot up all of a sudden. 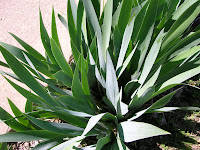 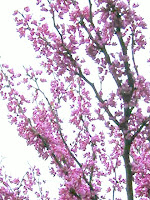 Glad to see you're back up and running. And now taht oyu have a handyman around, you'll have more time for knitting and blogging, right? :)

Ouch! Watch those pirouettes, they'll get you every time. *g*

Mmm don't you just love spring. Oh and mint how wonderful, I love the scent.
Wow I am so glad you were not hurt.
Hugs!!!

I have injuries from Libby's "spa weekend" too. Must be more careful trimming those hedges.
Sorry you missed out on the "Knit the Lamb a Sweater" Lamb. I'd have ordered two if I'd known you wanted one.
Sheri in GA (who will show a picture of her injuries on her blog tonight, just cause.)

Glad to hear you survived the rains last week--wasn't that something?

Sory you got hurt--I planted 2 strawberry pots yesterday and feel like I fell down a flight of stairs. Getting old's hell.

You reminded me about my bag of wool. I washed mine last fall and got it pretty clean, but it could use a couple more rinses, mostly because there's still a lot of soap in it. The yellow stains probably won't all come out--mine didn't, but a good dye job would take care of that problem.

Are you coming to Rendezvous in May? Hope to see you there!

Dave, one can hope! Certainly will leave more time for trimming and such.

Devorah, I think I've noticed that. But don't you think a missed pirouette sounds better than clumsy?

Cat, it's amazing how far one little pot of mint can spread! It's so good with tea..can't wait!

Sheri, I'll have to go see! As for the lamb, I didn't really decide I wanted her until it was too late.LOL I think I was most intrigued by the sweater, but discovered a pattern for one on the ball band of some dishcloth cotton.

Thanks Paris. I guess my body is sort of used to tumping over *G*

Katyar, you must have a really big space to hold all your garden! Will this cool front be a problem for your strawberries? Hoping that you don't have to drag them all inside. I sniffed the bag yesterday evening and it smells much better but I'm sure there is still soap in it so that will be a challenge for this week. Barring vehicle problems, I surely hope to go to Rendevous. It will be my first time...a rendevous virgin LOL

Well, at least there weren't a ton of people watching when you were auditioning for "Dancin' with the Stars".

So glad you are back in blogland - I missed ya terribly...and good that you found a handyman - that was kinda sad about being able to count...

I searched YouTube for your performance video--no luck tracking down your Spring Dancing Debut!

It's wonderful to have you back, you were MISSED!