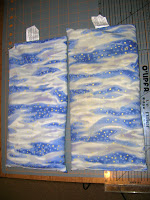 Don't get too excited. It wasn't a whole lot of sewing but I'm really happy at finally getting this done. I had these two fabric bags filled with flax seed and various herbs. The label says there is chamomile, peppermint, spearmint, rosemary, white willow, yellow dock root, cinnamon, valerian root, saw palmetto berry, lemon grass, yaroow, lavender, flaxseed and natural (but unnamed) grain. They can be heated in the microwave and smell heavenly. Almost makes having a headache or backache worthwhile. But the covers had gotten quite dingy, probably from the oils in the herbs...dunno. And, I always thought it would be cool to have a longer one that I could put around my neck and over my shoulders when knitting had made a few knots in that area too *G*. 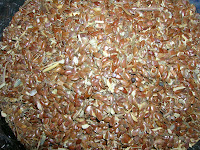 So today, I cut them open and poured the contents into a new muslin sack...sewed up the ends and voila!

But that was a bit boring and besides I thought it would be nice to be able to wash the cover, so I made it a pillow case. Could be a bit shorter, but was afraid that since it hadn't been preshrunk, 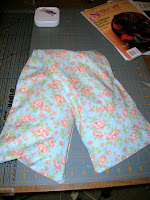 I would be in trouble later on. If not...I'll shorten it. The sack itself fits nicely around my neck and over my shoulders. And everything still smells lovely!

I had to get dressed to go eat dinner so since I was out, I gassed up the vehicle, bought some milk and bananas. As soon as I got home from the dinner, I changed back into my jammies and have been knitting a bit and will, in the fairly near future, be watching Wind of the Willows on Masterpiece Theater. I'm thinking an evening with Ratty, and Badger and Toad will be lovely. I'm not sure how it would feel to be told you'd be perfect for the part of Toad though
Posted by Susan at 4:13 PM

Oh Noooooooooo I forgot to record Wind of the Willows.
Oh what a wonderful idea for a stress reliever.

How nice and cozy! I have a neck warmer like you describe making and what I hate about it is what you love ... the smell. *g* Just call us unscented squid. Now I just *have* to make new cases for all our other heating pads! *Big Grin*

Have a great day!

Oh I'm sorry, Cat! Maybe they'll repeat it. It was quite good and Toad was hysterical! Amazing how, after a few minutes I forgot they were all really people. *G*

LOL Devorah. The scent is the reason I had two of them. My boss also bought one; hated the scent and gave it to me. I think I need to replace my big heating pad. Part of the plastic covering is brown..maybe there's a hot spot? It has a winter cover and a summer cover. Both are flannel but the summer cover is light colored (so it won't seem so hot?) *G*

I love those - those are what Scarlett makes and sells - but she calls them ache packs...she has some that don't have any scent and others that do...mostly lavender...

Sara and you were working on these on Sunday? I think I"m getting scared LOL. What else does she use? Flaxseed?