Jackie was totally surprised! She did notice someone carrying in a gift bag but as it was another coworkers birthday, she thought it was for them. We're so clever! She got a lot of nice gifts, from accessories and towels and some totally practical things like the mop I gave her. Actually she got two mop sort of things. Did you know that there's a mop thing out there especially for bathrooms??? Got a swivel head and a sort of triangular cleaning surface for going around tight corners. I shall have to see about this! LOL

I left work an hour early to head into the City. Actually I came home and took a somewhat abbreviated soaky bath. I'm glad I got to leave early because I think if I had had to type one more page of medical stuff I would have cried. Being busy makes the days go by faster and insures that I have a job but whew! The bath revived me and off I went. As I left the house, I almost picked up my sock bag so I'd have something to do if I was way too early, then laughed at myself and left it at home.

I was the first one to get to the book signing. Guess what she was doing. KNITTING A SOCK! Is that cool or what? I introduced myself as Susan aka Red Dirt Knitter since that is on my comment thingy. I got a great big hug and we started talking like we'd known each other a long time but just hadn't spoken recently. Rapidly we discussed knitting, dyeing, blogging, books, spinning, paper making, and on and on. I did, at one point, stop talking to take a breath. At least I think I did. Then as others arrived I tried to be polite but soon we were all talking books at once! I learned of two new authors I want to try. I mostly read female authors except for Tony Hillerman, but these guys sounded cool. Do I remember their names?? Nope. Well one 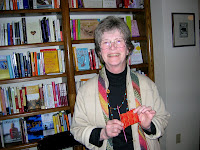 was named McGarrity, I think. I'll google that. But the other one? Nada left of his name. I just know that he is from the west and that there is a good rapport between the main character and a Native American. Big clue, eh?? Sheesh.

Of course there was picture taking. Did I manage to get her books in the pic? Nope. Did I get her sock? Yep :-)

So now I have lots of new ideas to think about. But right now I'm going to go put on my flannel pjs (it got cold here!) and read Spanish Dagger. It's going to be even more fun now since I've met the author and know that in rl Susan Wittig Albert is just too cool! Thank you Susan!

Outside the bookstore the 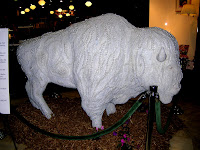 re was this huge life sized buffalo all decorated in pearls. I could not get a good picture of the intricacy that I saw when I looked at her but I did also take a pic of one hip sort of up close so you can see. 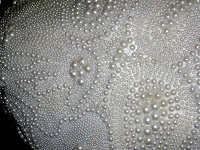 Never, never forget your knitting!!! O.k., it worked out this time but next time you might not be so lucky. *g* Glad you had such a great day. I will have to try out her books.

Glad you had such a fun time...I know the day was exciting! You sound so up and happy in this post!

Devorah, I thought I'd answered your comment. If I did, I didn't post it. I'll try to do better next time, both on answering and knitting. I think I want one of those knit bags that you can clip to yourself. I'll just walk around with a bag on my belt everywhere I go *G*

Sara, I was soooo happy and up. It was a great day all around even tho actual work has been toooooo busy. I hate being behind. But...there you go. The fun wiped that thought right out. At least until Monday