Barely Under the Wire 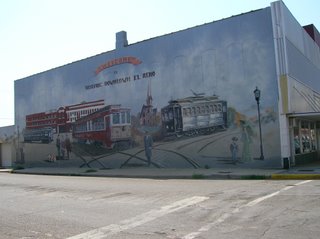 Just barely got this in in time. This really isn't the pic I wanted to post but it's the one that Blogger would take. The others were of the same building, just better pics. This is a mural painted on the side of a building downtown. At one time long ago, there was an interurban street car that went on tracks from here to various points outside of town. That's it on the right. The red car is also a trolley on tracks but it just travels around the town. It's a lot of fun to ride on if you pretend it's long ago.

It's been a nice day. Up early and hit the floor running. The dog and I both got haircuts...the dog looks pretty good, mine not so hot. But then, I don't claim to be an expert. I really was going to go have it cut, but that was $$ I'd have to spend next weekend when the fiber slumber party happens. So, it was dog clippers for me too :-).

Then the usual hustle and bustle of house stuff and laundry and all that jazz. This afternoon was spent with friends, watching OU get beat by Texas :-( . However, the Rotel dip and the little smokies and the beans and cornbread almost made up for it.

After a brief attempt to see if I could get speakers to work on this computer, the rest of the evening was spent curled up on the couch with the cats and sock knitting. Nice!

Hope your day went well, and there is still one more day of the weekend! Yay!
Posted by Susan at 7:57 PM