It's been a busy and fun evening. A bit of fabric stuff going on; some computer scanning; some knitting; a wee bit of ironing (the fabric) and some picture taking.

That's where the 'just pretend' comes in. I can't get the colors to be right in the dark night. Even with all the lamps on, it's just not right. So I'll tell you what to imagine.

So many folks were at Rhinebeck (although some really best folks weren't) so I decided to just journey around the web. And, while out there I found a new-to-me stitch called Farrow Rib. Probably old hat to most of you, but I was excited! So poor sockie went back in it's bag and I started rummaging in the stash. Now, outside of sock yarn and the yarn I got at the Fiber Fest and that wonderful Rowan that lives in my china cabinet so I can gaze at it lovingly, most of my 'stash' is of questionable quality. Lots of Lion Brand lives in there, bought when I didn't really know 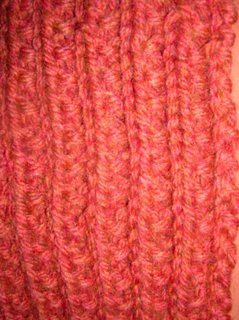 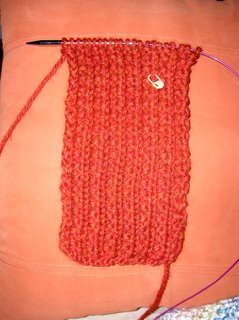 So, I found this bulky WoolEase and with new Knitpicks needles set out to see what it was like. And here ya go. The yarn is really a dark rust, and the pillow it's on is a medium rust. Not really orange. I have no idea how long I can make this sucker. I 'think' there is another skein but I haven't found it yet. Hopefully it can become a scarf headed for my friend's partner ... they live in Buffalo, NY and get lots of snow, so I'm thinking a really warm scarf could be handy. And...umm if it works, I'll have to get busy and make one for my friend. I don't think she'd be pleased if Bonnie got something hand made and she didn't. Oh and I didn't realize that the lower left hand corner was turned under when I took the pic. It really is str8.

These are pics are of the yarn cakes from the yarn I dyed at the fiber retreat. The green isn't 'quite' so garish. But it's all pretty wild. I'm exci 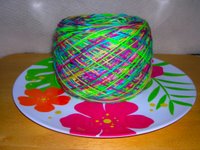 ted about swatching it. And, of my new plate! I 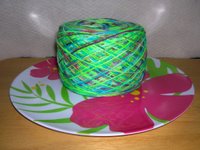 won a cake in a raffle and it came on this fine Melmac plate. It's such a happy thing! And the cake was a huge, 3 layer German Chocolate cake. Yum! And fun sharing it with my coworkers. I don't think I've ever won a cake before.

The fabric project is still just little pieces of fabric so not much to show there. But hopefully soon. It's a fun project and I just hope I can get it to work right.

Sock? Oh, poor sockie is asleep in the bag. I frogged the heel flap...I really didn't like the way the reinforcing stuff thickened it up. And then re-knit it and turned it. And once that was accomplished, it was time for sockie to have a nap. Socktobefest? Well...I worked on them in October, does that count???
Posted by Susan at 7:11 PM

I am right with you on the Socktoberfest idea...

Soctoberfest? Socktoberfest? okay what is Ann talking about. I'm clueless LOL.
Mmmm German chocolate cake, how lucky to win that. I also love that plate, can't wait to see what you knit with the dyed yarn.
Hugs!

I only got my SocktoberFest socks done because I'm a compulsive little freak.

Ann,I would have sent you a slice but I didn't want to trash the new healthy you! I'm so proud of you!

Cat, one would think I was clueless too. I didn't even get the meme filled out. I guess I should be ashamed. I'll blame it on my short attention span brain *G*

Cookie, you're the coolest compulsive little freak I know. Isn't the plate fun? I think I was more excited about it than the cake. After all, it's still here *G*