Remember on Saturday when I said 'list things' could happen on Sunday. Umm nope. First plan was to head outside and work in the yard in the morning, and then in the afternoon travel to OKC. I wanted to go to this park called Martin Park...a real natural place..and take pictures. And then, I had heard that the LYS was open on Sunday afternoon. just sayin'.

Alas, my back, which on a good day isn't the best, decided that mowing and trimming wasn't going to happen early in the day. OK, so now the list has been modified..skipping the park and the lys and changed to knitting in the morning and yard in the afternoon. Still a good plan.

But after some entertaining (?) political discussion on the morning news shows and a bit more knitted on Farrow Rib, it became apparent that the back was not sorting itself out at all. And sitting was really, really uncomfortable.

New plan...find the dang heating pad and the Theragesic and Lortab. So a nest was made across the big bed. And smelling like a menthol factory and with the heating pad held in place by a very large teddy bear, and a cat curled up comfortably next to me, the afternoon arrived. Pretty comfy as long as I didn't move. Dang, when I made this nest I forgot the remote so instead of football I watched some really odd stories on some cable channel. Or maybe it was the Lortab making them odd. Dunno.

After a several hours, things were improved and I was hungry so a nice meal was made and eaten. ok so it was soup and a grilled cheese. But still quite nice. Back woke up and said 'hello? and you thought I was vanquished. Ha!'

My hip was desperately trying to curl itself up around my shoulder blade. So after a rather frantic search I found one lonely muscle relaxer and had it for dessert. Finally things got better and I could actually SIT. Yay me!

So to celebrate, I knitted...this. My first cable attempt. No that's not true, I tried it on 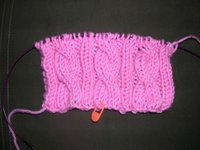 ce before but that was a disaster that barely registers in my memory. It was FUN! And rather magical. Who knew that the cable thing only happened once in a while and the other rows were knitting and purling. Now I will admit that I put the pattern on my old cross stitch magnet board and used one of the magnets to mark what row I was on. And I used a counter so I didn't get lost and not repeat the previous row. But I have CABLES. I don't know what's up with that little hole on the top right. Maybe the stitch was too loose? It was sooo much fun!

Yarn: my workhorse pink Cascade 220. I bought this for a little project and since then it's been used for all sorts of experiments and small things so there's not enough to make a scarf. MUST GET YARN!

Needles: Knitpick circs. Gosh I love these soooo much!

Question: Can I do this with such glee when not under the influence of legal drugs?
Posted by Susan at 4:47 AM

Bummer that your back was outta whack most of the day. Must be gettin' real cold out, eh?

And I'm kinda surprised you still keep Theragesic in the house :oO

Ouchie! I hope your back decides to play nice with you today.

The pink IHS looks lovely. It's such a fun pattern. That was my first cable pattern as well. :D

Oh hon! I hope you back is better. Can you tell I'm back LOL. I came home to a wonderful Halloween card waiting for me. How cute! thanks so much!
Hugs!!!!

I hope your back starts to feel better soon, sweetie.

Not sure what happened, but you're doing great with those cable. *hugs*

Cables..are very very addictive. You're gonna love them. The Irish Hiking Scarf was my first cabling project and I drove the knit bloggers crazy when I was trying to figure it out.

Paris, it's been attempting to make a statement for a week. I don't know what's up with that. And as far as Theragesic goes..it is my friend but the tube lives in a colored plastic bag so it's easily recognizable. Glad you liked the card. Much better than a bill, eh?

Otter, I've heard from several people that this was their first cable pattern. That makes it more special...like I am following a tradition *G*

Cat, glad you are back. The blogosphere was a bit empty without you! And thanks for my card too...and tea. Wahoo, I scored bigtime

Ann, ya know all this time I thought that every row you were twisting something around. I was amazed that my hands could make something so pretty! Now to rummage around in the stash and find something with more yardage. Although that 220 pretty much has me spoiled for lesser yarns LOL

love that scarf--i'm going to do that one too! I love the irish hiking wristwarmers--really easy, look great and really warm!

ohhhh Victoria...I didn't know there were wrist warmers. I hear Google calling me! Thanks!