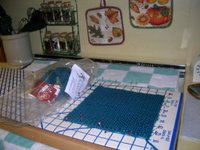 yesssssss...the 2nd afghan square for Laurie's grandma (or another resident of her nursing home) is done! After so many do-overs, I didn't even cut the yarn when I was finished. It didn't require much blocking...just a bit of tidying up from being squashed in my bag but still...I had this fear that when I took out the pins it would scrunch up into a 4x4. I even think I have an envelope, but still need to write a note to go with it. Oh, and find the address. Whew. I had no idea it would take up this much time but I learned more about my knitting.

1. I learned that I need to cast on with a needle that's a little bigger than the needle I'll use to knit the project. At least on an afghan square. I know I cast on tight so I normally cast on using two needles stacked together. But for some reason here, the cast on edge tended to be enough tighter that it pulled the sides in a bit.
2. I learned that if you must knit and watch The Unit at the same time, it's best to use somewhat blunt ended needles, otherwise something will blow up and you'll stab yourself. Blunter needles still hurt but you won't bleed on the project.
3. I learned that you can frog Cascade 220 a bazillion times and it will still look like yarn. just sayin'

I've learned something else. The Dallas 'Sortation Center' works very slowly. I have an order from Knitpicks in transit. It's been in transit since the 4th. And the majority of those days, it's been in Dallas. Geez. I should have just driven down and picked it up. It left there yesterday and hopefully it's made the Oklahoma state line by now! Maybe tonight I'll have new needles and some color cards to play with ::::crossing fingers:::::

Oh, and hey, it's 41 degrees outside! How cool is that? (pun intended). Will warm up later into the 70s but still. And tomorrow it's supposed to be colder..with a wind chill even. I have to go to the store tonight and shall get some potatoes and make a nice steaming bowl of soup for supper then.

Indeed! Life is good! And the square looks great!

it was 34 outside yesterday morning! whoooo, thats chilly! come on fall!

220! OMG! That reminds me, I MUST start the next bag for a family member (trying to be vaugue in case one of them troops over here).

I had problems with Knit Picks AND Paradise Fibers getting shipped here. One with UPS, the other with USPS, and around the same time. Astrology is pretty hokey, but still, Mercury WAS retrograde, fouling up communications of all kinds. Paradise Fibers was great, Knit Picks not so much.

Thanks Paris. No bleeding...just a big OUCH. Well, that's not exactly what I said :-)

Cookie, it's the best I think. And yes, I'm thinking that could be quite painful

ohhh Vicki...that's cool! It felt so good outside yesterday morning and then I got to work to discover someone had turned on the heat. ack!

Heh Laura...get busy! Surely the laundry is caught up by now! The latest update from the shipper is that my stuff has left Dallas. Hope that it got to do a bit of sightseeing while it was there. It certainly had enough time.