Funeral attended. It was very different. I have never been to a service that was sort of blended in with the regular Sunday fare. Did get to see a former co-worker that I hadn't seen in a long time so that was fun. That concluded, I headed to the City.

Alas, my Borders didn't have the new issue of Simply Knitting. I thought perhaps it would be coming later, since it just went up on that website this week. But, apparently there was nobody in the store who knew anything about what magazines they did or didn't get. So I indulged 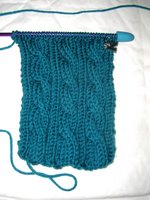 my need to spend money...can't waste all that gas...on a magazine full of cookie recipes. Which was rather silly since the majority of my coworkers are on diets and I don't really want to eat them..I just want to make them to satisfy my Susie Homemaker genes.

And I got Sting's new cd. Ohhhhh I just love it! So not like anything else I've heard from him. (Ack...I should have driven down the street to Barnes and Noble, I could have gotten it cheaper with my membership there) So, with Elizabethan lute music in the background I knitted more on the Irish Hiking mitts and got this far. I've done one row of ribbing with 7 to go, then it will be sew up time. There are some rather wonky cables there, but ya know, I'm just pleased as punch and can't wait till I can start the other one! I didn't, however, do a bit of knitting on the Christmas stuff. Last night was all about me! *G*
Posted by Susan at 5:02 AM

Sometimes different can be good. ;^)

I love Sting. Not so much cookies. *L* Lovin' that mitten.

Am really liking the color of that mitten....

I know what you mean about the susie homemaker gene. *L* It's evil I tell ya!

Otter, that gene kicks in every once in awhile. Then I wear myself out and go take a nap *L*

Here's a link to the magazine although mine was the November issue. I have to order this one now.

Now I have to order that one. The wonders of Paypal! *G*

Amiable brief and this post helped me alot in my college assignement. Say thank you you on your information.