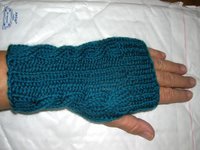 Tada! Finished! And what a fun knit. I loved doing this and am excited to get the other one going but I've promised the Christmas knitting that I'll spend a block of time on that first.

Made with Cascade 220 superwash, and as always, a joy to work with. I sort of wish I had put a band of ribbing around the wrist too. Maybe next time.

Funny story. Mon. afternoon I had an appt at the chiropractor's. Waiting room was packed with one empty seat. It was right in front of the window so excellent light and I pulled this mitt out of my bag and started knitting the ribbing. All of a sudden I was quite the deal! I showed them how it would end up being more of a wrist warmer, leaving my fingers free. A guy that works in the oil field doing something I didn't understand was quite impressed, stating that he bought regular gloves and cut off the fingers. A couple of people were amazed that I could visit and knit at the same time. I was feeling quite clever until I discovered that somewhere along the line, being so impressed with myself, I had switched from the ribbing pattern to seed stitch. Gah! So I started tinking. OH my, now they were really impressed. I don't think anyone realized what I was actually doing...but how talented I was to be able to put everything back the way it was. I was glad to hear my name being called before everyone realized I was a goof!

Wish I could continue to go. The 3 visits I've had have really, really helped. But at this place, there is a "Plan of Care" in which the whole plan is outlined including how many visits for how many weeks yadda yadda. Like for the first month, you'll go 3 times a week for 4 weeks. But here's the kicker. You have to pay for it all. Well of course you do, but what I mean is that you have to agree to a payment plan to get it all paid off as written. I can't explain this. Except to say that there is no way in hell I can come up with the money. Push to shove it would mean that me and the babies would have to quit eating so I guess that will be my last visit. My insurance will pay $500 and that's the lifetime limit (I'm thinking they don't like chiropractors) and that would only leave me with a little over a thousand dollars or $168 a month and there is not that much left over in my paycheck. Even if I don't order knitting magazines from Great Britain. :-) At least I do know that there is something wrong, I'm not just a back wuss and that, amazingly enough, was a happy new moment of knowledge.

On a brighter note, Wed we are having a potluck at work. It's actually a soup meal. I love this and we do it every year. But there are always lots of other things besides 3 or 4 different soups. And by popular request, I am taking my jello based cranberry salad. I love making it and I love eating it and apparently so do a lot of others. So, I'm off to get a bit of the chopping up done before work so it will go faster this evening.

See ya. Hope your day is everything you want and more.
Posted by Susan at 4:14 AM

It's such fun when people are impressed with our knitting...
How come you didn't get that guy's name - you probably could have gotten him to buy those from you...

Have fun at you soup pot luck...

Mmm a soup potluck sounds wonderful. LOL I love how everyone was surrounding you and oohing and ahing. How neat@!!!!!!!
Now to tell you something that a friend's hubby told me (he is a chiropractor). He said that if a chiro. wants you to do weekly and then monthly visits he is after the money and not fixing your back. It shouldn't take a lot of visits to take care of your problem. One or two to fix the problem(s), (unless you have very extensive injuries or do work that causes the injuries to repeat itself like a football players), and then a few more to make sure that the adjustment stayed. Hope this helps sweetie!!!!!

Superstar knitter..please take a bow! It cracks me up when people are impressed by knitting...

hahah I commented back to everyone and tucked them into emails but closed this window without posting it. I'm really on the ball this morning!