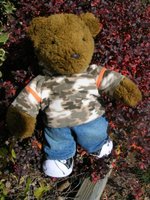 A day at the mall. What fun we had! Amazingly, when we got there a little after 10 there were lots of places in the parking lot...the mall or the stores weren't really crowded and although it did pick up, it was never crazy. Guess all the Friday shoppers were sleeping it off. Build a Bear was lots of fun. The little guy was so serious while he did all the 'heart' stuff. Concentrating hard as he rubbed it on his cheeks and tummy and gave it a kiss before it was stuck inside his new..uhh frog (who he named Seth). I didn't build a bear but I did get my old bear some new clothes and shoes. Once a kid, always a kid? Free catalogs were picked up at Pottery Barn (oh how I want one of their leather chairs!) and Eddie Bauer (I want everything in the book). I saw a great Christmas tree at American Eagle (I think) decorated in yarn balls. We were basically through and the little guy was getting tired when I went on one last hunt. All I needed to do was to dash in the Hallmark Store and grab a couple of cards. Unfortunately I got direction turned (and there really should NOT be two Dillard stores at opposite ends) and lots and lots of steps were wasted. Finally with it in sight, I suggested that my friend and the little guy just sit down and relax while I finished up. And they agreed and found themselves a good spot.

Now some of you..like Laura..know I'm a big football fan. And maybe you remember that I dreamed that Boomer Esiason was my best friend. And I sometimes pretend I know this guy that played for the Giants and Tampa Bay...well ok, so I don't...but I 'know' his delightful and creative wife and occasionally I read about something he did/said.. But still... So if you aren't the least bit interested in football, this will be really boring. Forewarned.

So I hustled down, got the cards and headed back. They were sitting on a bench gazing across the space and there were a lot of people in line for something. I glanced over, and sucked air. Because this guy looked so familiar. and then I realized two more of them looked like ... Steve Owens and Billy Sims and Jason White. OMG! Not only were they amazing OU players and Heisman winners but Steve and Billy (of course, we are on a first name basis) went on to play for the Detroit Lions before their knees got the best of them. Poor Jason's knees left before that. NFL, folks! Was this football nirvana?? I almost ran over to get in line for autographs but decided first to figure out just what was happening. And a good thing I did. Because it cost money to get the autographs even if you didn't buy one of the footballs. And I just didn't have the extra cash. So I was content with just watching and snapping pics. (which are not blog worthy due to the lighting but a still fun). The Girl needed to run into Claire's and while she was gone I realized that the line had cleared and they were just standing there talking. So, courage in hand, I went over and asked Steve about his younger brother Tinker, who was a wide receiver for OUand played for New Orleans for awhile. He very calmly and with a straight face said "Oh he just got out of jail". And then laughed..thank god! White was drinking out of a water bottle and almost spewed. Sims laughed uproariously. And then Steve went on to say that Tinker had just become a grandpa and had just turned 50. My god, I'm just older than dirt cause I remember him as such a young kid! They were really nice and friendly even if I didn't have cash in hand and I know I just grinned big like a dummy while they chatted with me.

But alas, laden down with free catalogs, body cream and bear clothes it was time to leave. And a good thing. Because even though I only played football for a brief time, my knees and hips were really really tired.

Came home and crashed on the couch to watch...football LOL. And then Mac called and asked "Are you rested? Want to go to Kohl's?" Well yes! And besides, she'd let me go on and on about talking to the guys. *G* So off to Kohl's and then even to Big Lots.

knitting? Umm a few rounds on the hat once I got it transferred to the smallest circ cable that came with my Knitpicks needles. And that was a relief since the stitches kept falling off the dpns. And then bed.

Today is going to have to be really busy. The house is a mess, I have a turkey breast to cook, no Christmas decorations got put up yesterday, laundry is piled up, and there's a really cold front coming and I need to make the other mitt.

Isn't it great when you can avoid the crowds. Do we get to see the little guy's frog? Curious bloggers want to know!

Hopefully, I'll have a frog to post. I did take pics, but my friend has my camera downloading them to her computer.