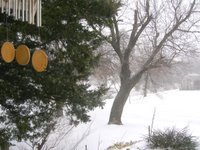 It sleeted off and on all night and then there was freezing rain and thunder! Finally that's stopped and the snow has arrived. It snowed briefly earlier...big, pretty, fluffy flakes but then it went back to sleet or else really sharp, tiny snowflakes. I was just getting ready to go out and see how slick my steps were when I was called and told the office was closed. Most of the people there are out on the roads all day and I guess they maybe were worried about liability. Works for me! I was hoping that we that stay in the office would be declared non-essential.

So...I've baked another batch of dog cookies and read and finished this hat. It's sorta wonky I think. I've never made a hat before so I'm not sure what it is supposed to look like but I thought it would be flatter at the top. The white yarn is waste that I used to tie up the last stitches. 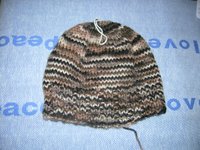 I'll try it on The Girl and then decide what's up.

I think the blue socks that were put in time out are going to turn into a present if I can get them finished. Now I have to remember where their time out is. I think they are in the cedar chest. It's not really lunch time yet, but I'm hungry and I've made some potato soup and I think it's going to be just great after I chunk up some cheese in the bowl before I pour in the soup. At this rate, I'll be ready for supper by 3:30. *G*
Posted by Susan at 9:11 AM

Looks like a nice hat to me. They aren't always flat on top.

I'm so glad you got to stay home today. It sounds wicked bad over there. *hugs*

I wish I had stayed home today. I was out in the driving sleet/rain at 645 this morning scraping my car. I bet we had less than 15% attendance at the office. I finally came home around 2, and now I'm wondering if tomorrow will be any better. It's pretty bad out there.

WTF! You guys are getting snow in Oklahoma - and here I am in New Hampshire - and haven't seen a drop of the white stuff...hmmm.

Glad you had a productive day anyway...

The weather seems a bit mixed up. I went to work without a coat today and was warm. I hope you enjoyed the rest of your snow day!

Cookie...whew, I thought I'd really screwed up. Hopefully it won't look like a cupcake when she tries it on. Sure is fun to make though. Now I want to make more!

katyar...glad you got home safely and hope you had a good nap. Do you maybe get to stay home tomorrow?

LOL Sara..it's allegedly leaving here and heading towards Chicago. I don't know it it will turn more east or not.

Devorah, I'm thinking that that card that you sent me lured it here. It was shirt sleeve weather here earlier this week. Now the wind chill is 0.

There is nothing like staying in all cozy, and knitting on a day like that!
Your hat looks fine to me. It probably just needs a smiling head to fill it!

When I was making my first hat a few weeks ago I kept trying it on and in shock and telling my honey to look at how hatty it was. *L* I'm still in shock. :P

Sadly, the sleet and a tiny bit of snow is all we got north of the river.

Fry is out frolicking and rolling around in the ice, wearing one of the first hats I did on the Bond knitting machine. It's ok, but I hate the seam. Much better to do them on the double pointed or two circulars. :)

I do love the colors in your hat pictured. Very lovely. :)

Kirsten, it was wonderful! I just wish I could have done it again today. Thanks...I hope the smiling face likes it!

Otter...what a good description. There's nothing quite like a 'hatty' hat *G* I thought it quite amazing that it was actually becoming one. Now I want to do fancy ones LOL

Laura, well be glad you didn't get what the eastern part of your state received. It doesn't sound too fun since there are so many power outages. I used dpns on the start of it but then discovered I could use the shortest cable that came with my knitpicks needles and then it really went fast and nothing fell off the needles. It's kind of fat worsted..and camo so maybe the stitches wanted to disappear *G*

Yay for *Stay at home Snow Days*! I haven't had any of those since I was a kid and the roads were closed, back in my Montana days. I hope you got to enjoy some relaxing time. The hat looks FUN to me...it looks like the shape of every other hat I've seen in the stores this winter... so like, I don't see anything wrong with it. (but we ALL know I'm not the knitter.. lol) *hugs*