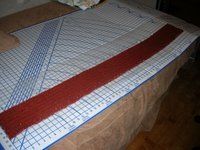 Farrow rib is off the needles; ends woven in and blocked...and now even put away for Christmas. I finished it about 11 AM and decided it called for a celebration. I discovered that I get really sick of the same stitch, same color over and over. Even when I have to rip back *G*.

I washed it in some lavender soapy stuff (what do you all use to wash your woolen things?) and pinned it out to dry. A bit later I heard this funny "popping" noise, like little tiny hail. But no, it was Hershey, who was very industriously pulling out the pins and then (fortunately) spitting them out. Thanks cat! So I turned the ceiling fan on high and babysat the dang scarf until it was dry

So, anyway, I slicked up (translated: took off my jammies and put on real clothes) and headed off to the City. I'd thought about making several stops but on the way over, a semi cut in front of me so close that I couldn't even see the mudflaps!!! Scared the S*** out of me and all I wanted to do was be home *G* So I narrowed down the shopping to Barnes and Noble (needed a birthday gift) and the LYS.

I got some Cascade for a scarf for me later on, and I got some yarn for a new Christmas scarf. See above where I lamented one color? Well that's sure been changed. I'm sort of using the 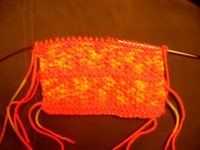 pattern that Ann used for her Red Scarf Project. Seed stitch sections divided by knit rows. The idea was that the knit rows would be the solid color because the yarn is so busy that you'd never see them otherwise. However, after swatching I've decided I need to do something else. Like make the sections much wider because...well that's a lot of ends to weave in. But...it's not boring LOL.

The giftee was going to get a felted bag, but then in a convo she mentioned that she had just about quit carrying bags sooo. She also told me once that she was tired of classic looking things and wanted wild. And since knitting with those novelty yarns makes me shiver this is what she is going to get..and it's not classic, that's for sure. And if she ever gets lost in the snow, she'll be easily found.

This yarn is Plymouth Encore Colorspun, color 7137 (you can see it if you click on the color card) that is a mix of bright orange, pink, lime green, yellow and the solid color is 9623...ack it doesn't even appear on their color cards...it's bright orange. My pics turned out horrid and I can't fix them to be true. Will have to wait for daylight.

Coming home it started pouring down rain. After the truck incident, I really didn't want to be on the interstate again, especially with the rain so I came home on old Hwy 66. The Mother Road was full of places to hydroplane so it took awhile but finally I was home. And, as I pulled in the driveway...it stopped raining LOL Guess the weather goddess showed me where I needed to be, eh?

And now it's Monday again. The day will be broken up by a visit to a chiropractor just for kicks. I just want to know what he thinks.
Posted by Susan at 3:54 AM

OOO ... close calls are soooo scary! Glad you are able to come in here and tell us about it! Weird how the rain stop'd like that, eh?

The scarves look grand and whoever wears either one will NEVER be lost in the snow, for sure!! I have no doubt the recipients will be very pleased!

I've become way too Yankeefied when "slicked up" jumps out at me. :D It's something my Dad says all the time, like, "I need to get slicked up and run into town."

Ooo, the red scarf project. I did that last year and need to again. I'll have to dig through and find some red yarn, like, that'll be tough.

I'm glad you survived the trucker's stupidity. Expect other drivers to be idiots and they won't disappoint.

I use lavender Eucalan. You should be able to find it at your LYS. If you can't, lemme know and I'll send you some. It's a wool wash with lanolin added. It also comes in a non-lavender version.

I'm so glad you made it home in one piece! I hate traffic and semis on the road. Something about driving a small-ish car, I think. ;^)

Glad you are okay...You can tell I've become a small town girl and just hate to drive where there is a lot of traffic...and semis scare me big time...

Paris, I was so glad to be home! I think I'll include notes with the scarves that if they don't like them, send them back to me LOL

Laura, you need to get back to your roots *G*. I once was chatting with someone in IM. We didn't know each other well and all of a sudden she types "You live in Oklahoma! Nobody else says 'tumped'" Turned out that she was from here also. Haha I think, with your stash, you'll find something. My red scarf is on a lifeline cause I stole it's needles. I think I must have been in the trucker's blind spot. It wouldn't have been quite so scary if I'd been able to move but there were vehicles on either side.

Oh Cookie, thanks for the soap name. I could remember it started with an E but that's all.(sometime my brain just sucks) I got this soap at the LYS but it was $3 for 2 oz and I can't afford much of that and it's almost gone. I do love the lavender scent tho!

Sara, me too. It didn't used to bother me that much, but I find I'd just as soon stay home as fight the traffic. thank goodness for online shopping although it's more fun to be able to sniff the yarn and actually see the fabrics.

OH sweetie I am so glad that you are safe and that freaking tractor trailer should have its tires shot out.
Hugs!!!!

hahah Cat! You can be ferocious can't you? Another side to your personality. I love it