That's what I've got. It's been with me for a couple of days now and I think I'm actually getting used to it. This morning I thought perhaps if I had less hair it would be better. So my hair is shorter but I really need to get scissors that aren't designed for clipping little stuff. It took awhile. It doesn't look that great...but it's one less annoyance. I think it's a combination of allergy and stress. Today I decided that maybe if I did some major cleaning, I'd feel more in control of my life. Good grief, I even washed the plumbing pipes under the kitchen sink.

On the knitting front, mostly it's been frogged. We still haven't had a softball game due to weather but I decided to just go on and knit and maybe get through the heel and gusset and could use the foot for softball knitting. Then I decided to try one of them on. What was I thinking? They would have been a nice fit for a child. So they're frogged and whe 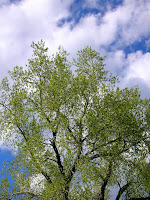 n the yarn relaxes a bit more I'll cast on the proper amount of stitches for my foot.

Last Wednesday the sun shined, and I took pictures. So that's what I have. Hope you enjoy them. I'll try to be a bit more upbeat tomorrow.

O darlin' ... I sure hope it's gone by now! I saw on the news that a bit of vibration [where it hurts] can be a big help for a headache!

Oy, I hear you about headaches. I had one for almost three days. And nothing seemed to help. And, just when I got used to it, it was gone.
And that's one almighty sky pic, too.

I feel for you! Weather changes cause sinus headaches for me and they are miserable.

F it's still there but much smaller. I'll try your idea.

Oh Dave, you give me hope. This is the third day, and it's lessened so maybe it's truly on the way out. One can only hope! And thanks for the comment on the sky pic. I couldn't really see what I was taking through the viewfinder due to the sun so I was happily surprised to find it looked like it did in rl LOL

Devorah, usually my back is the weather prognosticator but it's been behaving. I guess my head demanded equal time!

You washed the pipes under the sink? Call the guy in white coats it's much more serious than a headache!

I hope you are better today. I have been blaming everything on this uncooperative weather--where's Mel Gibson when you need him?

I hope you're feeling better today, sweetie. Headaches are just the worst.

ROFL @ Ann.
Headache go away and leave her alone, back I say, back!!!!
Oh I know exactly what you mean by frogging, I did the same to a pair of sock.

Hope the headache is gone. Hope your weekend is going along smoothly and you're feeling more like your old self.
Sheri in GA

LOL Ann..you just keep getting more glimpses of my weirdness. I guess I shouldn't tell you that today I wiped down the washer's drain hose, eh? I guess we could blame it on Imus.

Cookie, it's almost a memory now. Just sort of hiding at the top of my head. Soon it will be out in space all gone.

Cat, you must have done a really good job with that command. It's almost all gone and I feel so much more like myself. Which may or may not be a good thing *G*

Sheri, I don't feel as 'old' self as I did yesterday which is a very good thing. It's been a nice day. And more nice since I was able to go outside in the sunshine. Nice to see that giant orb in the sky!

Glad you finally are having less pain, and it's almost all gone ... hope it stays away! Goood, goood, gooood vibrations!! heh heh

Poor kid! It's a true migraine if it loiters like that and nothing over the counter kicks it.

Good thing you tried on your sock before getting to the toe. :D Not that I've done that. Not more than a couple of times, anyway.

Oklahoma skies are always wonderful. I love Missouri, especially now that it's greening up around here, but the skies are blah.

I told the husband, "Susan, you know, the Red Dirt Knitter, lives here," when we passed your town on Easter Sunday. If I'd been alone, I'd have stopped, plus, it was a holiday. I couldn't interrupt your egg hung and chocolate binging. :D

Laura,
wow I thought that with migrianes you had to be nauseated and the light hurt your eyes and such. Only thing other than the headache that I noticed was noise seemed noisier. Nothing really touched it...it just sort of faded away. But the odd thing is that now my head feels sore where the headache was. I'm just weird!

Darn, if I'd known when you were going to be driving by, I would have stood on the side of I40 and waved at you! Hopefully someday you can stop for a bathroom break and I can meet you if only for a minute or two.

Hahah I don't feel so bad about the sock now if even you have done it! I have NO idea what I was thinking when I cast it on. Still isn't back on the needles. I remembered that I hadn't ever made the 2nd sock to Susan's Horcrux sock. Remember? The one that she posted the instructions to one section at a time. Ready for the gusset on that now. I'm not sure I have enough yarn to finish it so I may have different colored toes *G*

HA! Good thing that part's inside a shoe, eh?! LOL