Nothing much to say 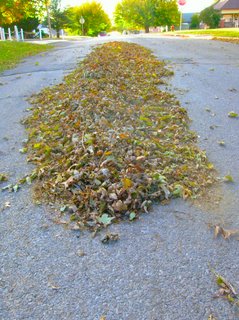 The wind played a trick on these leaves. When I left for work, there were some on both sides of the street. Later in the morning I drove by as I did the Dr. rounds and they were mostly on the north side. Some time later, the wind shifted and they decided to meet in the middle.

This one is entitled "Leaves on Broken Birdbath Base" It's concrete and too heavy to move so it shall be a still life. uh huh. I don't know what the stuff is. It gets really red later on in the year. A neighbor told me it would make me break out, but it doesn't so I just let it be. 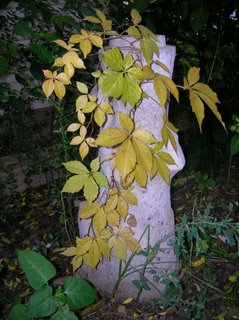 That looks like Virginia Creeper vine. A lot of people are allergic to it, but not me, and I guess not you either. :)

Oh thanks, Elabeth. I guess we are the lucky ones. I once had someone refuse to do some work in my yard because of it.

Cookie, it's really pretty once it turns red. Hopefully this will be a good year for color.

Oh you must take a picture of it when it turns red, it is so pretty now I can only imagine.
Hugs!!