I'm here and feeling better but I've been grounded from my car except for jaunts to the grocery. So no big shopping this weekend which would probably have been true anyway since the bills took most of my paycheck. :-(

My doc called the City doc who called some other doc who is supposed to call me. Only good thing about this is that both of the City docs are close to the yarn store *G*

Wasn't able to knit much besides washcloths which are very non-demanding, and I thought good for my needle-and-pins hand and arm. Did start a summer sock last night but have so little done that there is really nothing to show.

Today is being spent ironing pattern pieces and making adjustments and hopefully getting some stuff cut out. I hate that the most. Don't mind sewing at all, but cutting out is soooo boring. I'll feel sooo good when that's all done.

I'll leave you with some pics of the yarrow that's blooming it's heart out and nearby lantana. 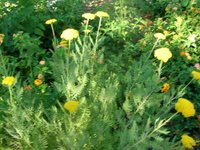 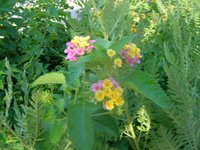 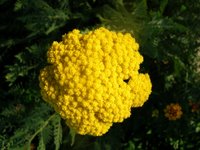 I am glad to hear that you are feeling a little better.

And send lots of get-well thoughts and tell ya *lotsa love* Susan!

Thanks Ann...me too! I think the most distressing part is being scared LOL. So instead, I've been making a list of stuff that I want to get at the yarn store. Not that I can afford it all, but lists ...for me anyway...are calming. It makes me feel better too, when folks like you wish me well.

Susan said...
This comment has been removed by a blog administrator.
5:02 AM