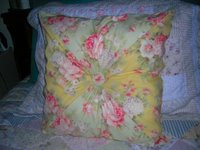 At least on my list of things to accomplish. I didn't get everything cut out, but with the accompaniment of a book on tape, I got much of it done. And stacked...and hopefully not forgotten.

I sewed up a pillow for my bed and discovered that the pillow insert was too small but I was so desparate for something to be completed that I stuck it in there anyway. LOL 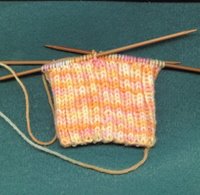 And progress was made on what I am calling my Dreamsicle socks. It's yarn that was dyed with diluted Kool Aid left over from the yarn I sent my Dye O Rama pal. I'm liking it a lot. Certainly not really self-striping, but so far just an interesting blend. Oddly enough, occasionally I see a faint hint of aqua. LOL something went amiss for sure. Hopefully it will just appear as a shadow. And since they are socks, maybe nobody will be that close to my foot :-)

In other news, my washer seems to have developed a major problem. It washed just fine until the last load and then when it entered "spin", it made horrid noises and by the time I got out there it was smelling like burned rubber. Ewww. Fortunately it wasn't a load of towels so I was able to get everything rinsed and wrung out and now I'm trying to do a load of handwash at night before I go to bed. I hate our laundry...it's really kind of icky but will work. But an answer must be found because well...ya know...I love to felt stuff and I can't see me plunking quarters in a rather grungy washer over and over LOL. I looked in the newspaper but didn't see any appliance repairmen listed. Wonder if I can figure this out by myself?

Sorry to hear one of your favorite *toys* is on the blink! Sounds like it was an uneven load and maybe a belt couldn't handle it too well. And maybe you SHOULDN'T do it yourself, since you're not at 100% ... ask your best friends hubby to come and take a look! LOL

I love those colors!

Ohhhh..I like the sock a lot. It's amazing to me how the yarn takes on a life of its own when you start making something out of it.

Great stuff, and call a professional for the washer...he will bring a gun and rob you blind of course. That's what my dryer repairman did a few weeks ago.

Ann,
heh, the repairman would strike out here and beat me to a pulp since I don't have enough $$. I figure that since it's hot and I'm not really in a mood for big stuff I have a while to save up. Till then, it's kitchen sink and washboard. OMG I'm really regressing here LOL

Paris,
Yeah for someone who counts doing laundry as a hobby, it's almost tragic ROFL. The hubby is pretty overloaded with being everyone's DIY person and you KNOW how I hate to ask for help.

Thanks Victoria! LOL I'm not near as busy as you though!