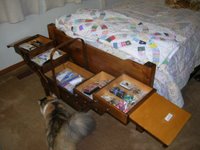 I love to sort. Maybe that's why I let things get in such a tangle, just so I can sort it all out again. The most recent need to sort involves sewing boxes. I have two. One was 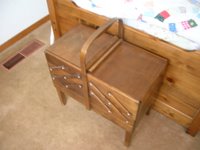 always mine, one was mine (a story there for another time) but my mom commandered it. This latest sorting was necessitated by a need for a transfer pencil which I was sure was in *my* box. But the stuff was so jammed in there and mixed up that I just upended it all on the floor and started from scratch. A ton of skinny bias tape (which I will probably never use but ya never know) A lot of Velcro...odd since lately everytime I've done a pillow top, I've bought new. A bunch of buttons. Fun to look 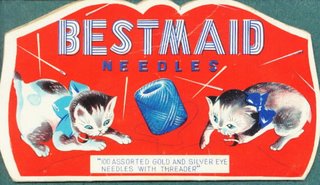 through since, with some of the used ones, I can remember some of the garments they adorned. And some that I swear I have never seen before. A few wooden spools. And these little treasures. 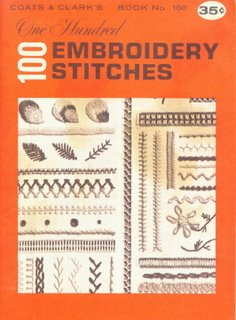 The price tag on the needle books says 17 cents. And obviously back in 1964 the book of stitches was something I probably hesitated about. I told ya I was old! *G*

And now the sewing box will close, and hey, I can even find stuff in it!

As far as knitting goes, I have the heel turned and gusset begun on Dreamsicle sock #1 and the cuff done on #2. I'm doing from ribbing down on a size smaller needle so I want to get it far enough along that I can try it on before I start the heel on #2. Maybe that will happen today...who knows? Certainly not me LOL
Posted by Susan at 7:53 AM

OK, that's not fair! I LOVE those multi-tiered sewing boxes. (Still lusting for one, too.) It's SO much fun to go through boxing of sewing "clutter", my own or other folk's. (Junk shops, flea markets and antique store sewing equiptment is a close second.)
Thanks for inspiring me to want to clean out mine right now...

Hey Murph!! I have one of those! Well, my brother has it, so I should say my mom got it from her mom, and it's gonna be a part of our family for a long time, no doubt!

I have her old Singer, and in the drawer was a percolator coffee maker glass center piece! LOL ... you probly recall those, right?

Anyway, back to your stuff ... very cool indeed!

I have one of those percolators. It's the only way I can make coffee... not that I drink the stuff. *L*

I love that sewing box! I would love to get my hands on one of those. My sewing box isn't nearly as classy looking.

Cookie,
I remember that at one time we had a bright red percolator. Sure wish I still had it. Would be a great accent piece!

I love the sewing box but the one that gets the most use around here is actually one of those fancy gift boxes from a Christmas past. Just big enough for needles, thread, scissors, pins and the ever needed seam ripper *G*

Paris,
I think you should get that box from your brother. It would make you a really good bead box. And wow...wonder what all is in it? Do you ever use the sewing machine?

Dave,
I'll be on the lookout for one for you. I paid $10 at an estate sale for mine. It's been a few years ago but still...ya never know.

I love old sewing stuff! Especially things that have advertisements on them or are souvenier stuff. My darning egg (which doesn't have a handle) is a souvenier from some trip my mom went on a long time ago. And it comes apart like those plastic easter eggs so you can stash needles inside it. Too fun!

I believe I've seen those sewing boxes on eBay, however, since they are *old* they are not going for cheap! I know I've seen the Singer I have.

I'm going to call m'bro right now and see if he'd hand it over!! LOL

Doesn't it just make you feel more productive when you take some time to get things in order?

Paris, did you call your brother? When is he bringing it to you?

Ann,
Yeah it does! There is so much to be done around here. I tend to go from passion to passion. Right now the china cabinet is almost filled with paper stuff from when I was making cards all the time. Can't remember when I last made one. LOL I need a warehouse. One area could hold all the paper stuff. One area sewing/quilting stuff etc. And then I could just bring out whatever was my current thing. And, then I could fill the china cabinet with yarn! Woohoo! I must buy lots of yarn. It's for my dining room decor! Heh...think I could get away with that????

HA! I think you can get away with most anything you do!! We will hafta set a new *season* for you, so you can decorate your home to fit it!

Haven't got a hold of m'bro yet, so as soon as I have the sewing box here, I will see if I can send you a picture!

I like to "sort" things too, but I have never thougt about it beeing the reasen for the mess I make??? Good excuse btw. I'll use it next time someone ask me why I am sutch a messy person:)
hanne

Great to see you! LOL I need all the excuses I can find for lots of stuff and glad I thought of this one. Sometimes I think my rather meager yarn stash will be worn out from me sorting through it!

I think I'm going to ask for a Danish/English translating book for Christmas. I do *read* your blog and am always happy when I see Rowan cause I know what that is. But in the meantime I shall just enjoy the pictures *G*

Hope life is treating you and yours very well

Hey, hey, hey!! Got my brothers response: "You can have the sewing box if you promise to keep all the buttons, etc. that are in it" WoooHoooooooo ... you betcha!!