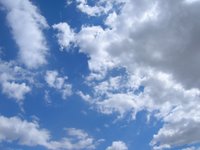 ...just 'cause I can! The camera has healed itself. Finally the batteries ran down, and the battery door would open. I was all ready to go to Staples', camera in hand, to see what I needed to do next. But first, I put in fresh batteries; and then, like I've done a bazillion times this week, pushed the ON button. And it worked! First the washer, and now the camera.

The only thing I can figure is that Lee Ann must be feeling a lot better. Hooray for that. Last week Stephanie was posting that all the irritating, confounding things that were happpening to her must be insuring Lee Ann good luck with her surgery. Sounded like a good idea to me, and to a lot of other bloggers. So last week, which was a truly irritating one, was somewhat easier as I would tell myself with every upset, "That's one more bad luck that won't find Lee Ann".

And now all of a sudden, things are much smoother here, and I read that she even went for a walk. So there ya go, knitting karma?

Then the mail arrived, and I had a vacation postcards from Paul and my friend Sam who both

were kind enough to share the fun! Thanks muchly!

And remember when I mentioned that the lady that taught me about spinning said that there was a handspinner in my town? Well, I emailed her but never heard back. Dunno what happened there but she called me! Sounds like an amazing woman...she's even raising silk worms! We have tentative plans to get together soon. And she tells me that there is a Yahoo group for fiber folks here. I'll join that for sure. AND, there's even going to be a retreat in the fall...in MY town. So even if something happens to the vehicle, I can still go! I'm so jazzed!

And there is a new member to my extended family. Meet Sadie. She's a 6 wk old West Highland Terrier that now calls The Girl 'Mama'. It's her 12th birthday present..actually her birthday isn't until next month, but there ya go. She's adorable! TG 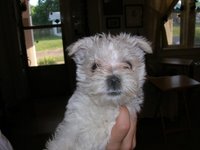 brought her down Friday evening as soon as they got home but the poor little thing mostly just shivered. Not so last night. She gave Zoey a run for the money. It's hysterical watching my big girl try to play with this tiny thing. I'm not even sure she knows what it is. Zoey was still up for playing, but Sadie, like babes the world over, just needed a nap! Too cute!

And it's still much cooler than it has been. Right now it's 64 degrees. I'm loving this!

The luck ran out tho when I worked on Sunday Socks. They got frogged about 9 last night, and restarted. Maybe there will be enough to show later on.
Posted by Susan at 4:50 AM

OMG! What an adorable peanut of a pup. I'll bet she moves VERY fast.

That little Westie is going to keep her family hopping. :D Sixty-four? I am so jealous. It's nine-thirty am here and already 95F. /dies

The is the cutest little baby! OMG! What a sweetheart! And I had to send Postcards - It was a suggesting from a comment left on my blog - I couldn't resist! hehehe.....

The weather broke here and it was a wonderful weekend. I sat outside and did some outdoor knitting on the front porch for the first time in at least two weeks.

I love your new addition, I look forward to the adventures for your little family.

OO how adorable!! I can only imagine the fun she and Zoey had!

Glad you are having some cool weather! We had 110 in the next city over yesterday, and it's 81 right now [9pm] ... had rain/lightning/thunder this morning, so you can imagine the humidty!! mmmm mmm ... love California!! heh heh

Dave,
Yep that little puppy can move...and then go to sleep just as fast!

Paul, I, for one, am very grateful that you sent them. It was a great surprise and completely overshadowed the bills that arrived the same day

oh cookie, please don't die. Just stay in front of the a/c or fan...for another month or so.

I hope you and the kitties are managing to stay cool. I can't imagine how uncomfortable those folks in NY are. I keep praying that their power comes back and I don't even know them. LOL

Thanks (((Susan))) ... I use the AC for about 15 minutes in the morning to cool off the place, then set the timer to turn it on just before I leave work. Seems to do the trick. We're on flex-alert!

As for the kitties, my grrl sprawls out, tummy up, sometimes lays on the bare floor in the bathroom, or in the tub ... she's got it figured I think! LOL ... m'boy is another story! No matter how hot it is, every Saturday he jumps into my warm clothes basket just back from the laundry! HA! I can't figure that out! Or I find him under covers here and there. Weird kitty!! [guess I shoulda put all that in an eMail, eh?]

Paris, sounds like your babies have figured out what makes them comfy. I didn't know until yesterday that, like dogs, cats can't sweat. Now I'm worried about all the kitties (was already worried about the doggies) in those areas with prolonged power outages. I wonder if, where they are evacuating folks, they are letting the pets come too.