How'd She Do That?

The Harlot linked to me!!! I have NO idea how she managed that cause y'all are the only ones that know me...but still..my moment of fame! ROFL This is indeed a mystery. I don't give out bloginess cards. Weird, huh!?!?!

If you read her post for today, you'll get to see a bit of the City. And some of the people that were there. If you look wayyyyyy back you'll see a little blip that has on an orange shirt. It's me! Ha, one of them look like I'm bald but I just have a white streak of hair that sometimes doesn't show up.

And the Susan that she thanks along with Margaret from the yarn store and the knitting guild isn't me. It's one of my favorite knitters at the store. She's really a sweetheart!

The 3 generation pic were people that sat right next to me. I adored them. I'm sorry I didn't get the mama's name cause she was just too fun and cool. And that baby was adorable. The Harlot had to stop signing when it was their turn so she could hold the baby. I'll admit I was wondering if the whole thing was going to be compromised by a screaming baby but she nursed, had a wee nap and then just smiled through the whole thing. Did I say she was adorable. Trixie, I love ya hon!

Since gas prices are so high, I'd planned to do a thousand things while I was over there. Instead, I took Zo to the vets for a manicure and then just hung out here doing little of nothing until mid afternoon. Then off to the City, where, thanks to Cookie, I made a pitstop at Michaels to load up on cotton. Then to Barnes and Noble for a browse and a iced mocha frappucino....gosh I love 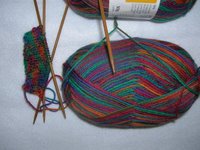 those. And then to the yarn store where I found this. Isn't it just the 'funnest' sock yarn? I sat down on the couch, took berry mouth off the sticks and casted on a new sock. Once I got the first row done, I headed off for the venue. Found my seat, found the restroom, discovered we could have drinks in this room so found a bottle of icy water (it was a bit warm) and took the Harlot sock out to enjoy the day with me. Uh oh, somewhere along the way I had lost one of the dpns. @$%*#)!!!!! But being the very clever (uh huh) person that I am, I improvised and discovered that the butt end of the crochet needle I use to pick up the dropped stitches works well. Of course you can't knit off it, but when it's time for that, you've got another empty needle. (:::looking at Paris...sorry if this sounds about as confusing as a dog trial). So, I go back to my knitting and we're all laughing about it, when some lady on the other side of the aisle says "Here dear, let me see if I have another needle you can use" and digs in her bag and hooray a needle. Then she was even kinder and explained that being aluminum it would be slippery and my gauge might change a bit. Knitters are way cool!

And then when I got back to the store for the signing, there was my needle lying on the table right where I'd been sitting. So all was very well that ended very well.
Posted by Susan at 4:59 PM

HOLY CRAP!!! I NEED THAT YARN!

What kind is it etc? I need to find a place to order that online.

Mysterious as it may be, Stephanie linked to you - that's how I got here. :) Congratulations on meeting her and making her visit so enjoyable. You can tell she really enjoyed herself!

I do agree, that sock yarn is wonderful, but what kind of needles do you have there?

whoa...lots of pretty colors there! I like all of the varigated ones!

Fun to see the yarn you are using. I am knitting with the exact same yarn. I bought two balls a few months ago. I am a teacher and set it aside until summer vacation. I just finished the first sock. I used the garter rib pattern from Sensational Knitted Socks. I love how the sock turned out. The stretch in the yarn makes it so that the sock really fits well on the foot (no drooping). Good luck with your socks. I would love to see a picture on your blog when you are finished.

I love it when Ann goes on point over yarn. *L* Lovely yarn, btw.

I told you! I told you she would know you/your blog. She's like the knitters' Santa or something. She knows who everyone is. Best not to think about it too much, btw. ;^)

Linked to you from the Yarn Harlot's site. Love! the sock yarn...just gorgeous...and all your creatures (cats, dogs).

I am so lucky to have such a famous person as my Favorite Color Swap secret pal. I am not worthy!

I like the new socks, that yarn is very nice.

Barbara,
I'm really liking this yarn a lot and I love all the colors they have! I use a standard crew top pattern that I learned from at http://cometosilver.com. But I'm going to be adventureous this time and carry the 2x2 down the top of the foot. How exciting, eh?

I'm always so proud of anything I actually get done..even if it's another inch of ribbing...that you'll probably be sick of them *G* Oh and you must check out http://sundaysocks.blogspot.com/
It's new and fun to see what everyone is doing!

And please, come back here soon!

Sarkasmo...I swear I posted a comment back to you earlier but I guess it was a figment of my imagination. I usually answer early in the morning when I'm not fully awake. That's my story and I'm sticking to it *G*. They are Crystal Palace bamboo..size 2. I'm thinking tho about using aluminum after I get the first part of the ribbing done when it's easier to hang on to. Hmmm wonder if my gauge will change. We shall see..hopefully when I go to Walmart for milk and oatmeal they'll have some in the right size. Yeah right. Last time I went there was no bread.

Ohhhh Cookie, does that mean we can address our Christmas want lists to Canada. Dear Harlot, I want....and I've been almost good. LOL

Beverly, glad you stopped by and hope you come back soon. My babies usually bring me much happiness except when they spill milk on the yarn LOL

K1P2 I am very lucky to have such a silly one as my pal. You're just too funny! And I love it!~

The Harlot linked to you? That makes you just about as famous as if Dave links to you!!!

I'm just sayin' Dave..he's some sort of crafting god...we are not worthy.

P.S. Thanks for the info on the yarn..I am going to check into that..and thank you for the wonderful snail mail card!!!

Wow! The Yarn Harlot linking to you? I can say I read you when... :D

I'm glad someone else asked about your yarn you're using. Saved me the trouble of asking. I'm eager to see how your sock turns out, too.

I'm glad she linked to you. I wouldn't have found you otherwise! Great blog!

Laura, it's a total amazement. But ya know, I think that I was already lucky in the folks that come to visit me!

I'm really liking this yarn. I'll try and post a pic of the ribbing so far later on this evening.

Paris, I've just been so lucky that such cool folks come to visit..and I'm just getting luckier every day *G*

procrastiknitter...thank you very much. Now I have to go visit YOU. Nice thing about cyber visiting is that I can do it barefooted and dressed in a really shapeless sundress that will never see the outdoors again *G*