I saw a segment on CBS Sunday Morning about blogs today. (It may have been a repeat since some of the other stories I had seen before.) This person who they interviewed said that bloggers and the people who read them were mostly highly educated, liberal people with high incomes. They were "trend setters" Wow! Then I discovered they were talking about political blogs. Oh well. 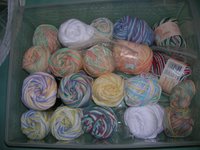 I spent a good deal of time sorting yarn today. I needed something to put my sock yarn in so it didn't get 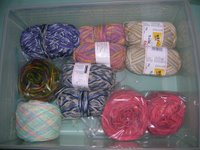 all lost. I remembered that there were a couple of those plastic drawer things in the basement that I thought were empty so went down to get them. Discovered that one of them wasn't...it was full of 'warshcloth' cotton from an earlier time when I crocheted dishrags. So now I have a lot of that...and the sock yarn is banging around in the other drawer. As slow as I am going on these socks, this should last me for months and months!


Not much knitting got done this afternoon...I got too involved in the soccer game.

What a game that was! I am so impressed with these athletes...they just go so hard for so long!

Did knit a bit this evening...a couple of swatches from some notes I found in the little notebook I keep in my bag. I don't know where they came from but they were pretty fun. And a few more rounds on a sock. One is ready for toes...one lacks a little over an inch. Someday....
Posted by Susan at 7:36 PM

Ha! We like the same colors, because I know some of those are in my stash, too.

My beloved but sarcastic Hubs would say, "Of course you have them." Ha! :)

I guess that means we both have good taste? *G*

"highly educated, liberal people with high incomes" they just forgot to add the "who like to knit part!"

Seriously..when you think about it blogger who are widely read--I don't fit in that category--really do have influence on the world of knitting and what people buy etc. I would probably not have purchased the Mason Dixon book if it weren't for the recommendation of two bloggers that I read.

As a group, we are trend setters and a force to be reckoned with...at least you and I are..the hell with what the rest of them think.

P.S. all that cotton..it's calling out for the Mason Dixon ballbands I can hear it in Ohio...

Why yes, I think all highly educated, liberal Oklahomans have exceedingly good taste.

Laura, LOL...I am beginning to think that liberal and Oklahoman is a contradiction in terms. At least judging by the political commercials.

I know! The conservatives like to complain about the 'liberal media'. Ha! I don't THINK so!

Laura, certainly not around here!